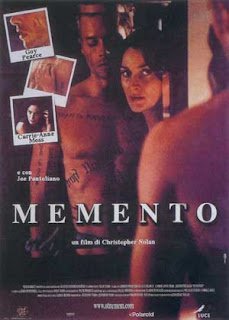 It can't be easy for anyone to solve a murder and punish those involved. It becomes much harder when your short term memory lasts all of a couple minutes. This is the predicament that Leonard Shelby (Guy Pearce) faces in Memento. He knows his wife was murdered and his purpose in life is to avenge this (as well as the destruction of his memory which is related to the murder.) by killing a man named "John G.______.

Everything else he knows is speculation based on a system of note taking he's developed to keep himself on track. Important and indisputable facts, he has tattooed on his body. He also keeps notes on the backs of Polaroid pictures. Every note, however, relies on him having reliable information when he wrote it, because he won't remember the act of writing it down at all.


In what I thought was a wonderfully clever touch, the movie is not presented chronologically, but moves both backwards and forwards in bursts about the length of his new memories, so we see him examining a note and then the circumstances that were behind it. It's clear that without a large tightly defined purpose, his life would be unbearable, punishing his wife's killer is exactly the purpose he needs to keep him feeling meaningful.

In the forward moving narrative, Leonard discusses a case he had as an insurance investigator, dealing with a Sammy Jenkis (Stephen Toblowski).Sammy had a similiar condition and gave Leonard the idea for his system of notetaking. In these segments he reveals his progress with Sammy's case, admitting that he didn't believe Sammy, seeing a "flicker of recognition" in his eyes. In contrast, the backward moving narratives show us Leonard's "allies" taking full advantage of his condition, gradually revealing both their realization that his condition is real, and how they can use it to their advantage.

His chief associates are "Teddy" and "Natalie." Teddy or Officer Gammell (Joe Pantoliano) is a cop who seems to be helping Leonard track down John G. We know that something is off right away because we see Leonard shoot Teddy at the very beginning of the movie in an effective rewind sequence showing from Teddy dead on the floor to the bullet zooming back into the gun.Is Teddy the John G. that Leonard's been looking for? Clearly Leonard thinks so, but the doubts about that grow throughout the film. We know that he arrives at this conclusion, but how does it happen. Was he manipulated or were his reasoning and system faulty?

Natalie (Carrie-Anne Moss) is also helping him find John G. From his notes, he believes she's sympathetic to him as she has lost someone and will help him "out of pity." As the story progresses backwards, it becomes clear that Leonard was involved with killing Natalie's druglord boyfriend. He doesn't even realize it but he shows up to meet her in her boyfriend's clothes and driving his car. She clearly despises Leonard and maliciously toys with his condition, bragging about how she'll use him and then leaving him alone in her house without a pen only to burst in moments later, claiming she's been abused to get Leonard to help her eliminate one of her boyfriend's rivals. Natalie traces a license plate tor him which gives him the name, John Gammell and Teddy's picture. Clearly Natalie wants him to get rid of Teddy.

Teddy, however (backwards) is moving Leonard toward another John G., Jimmy Grantz (Natalie's boyfriend.) Grantz is a drug dealer that Teddy wanted to get rid of and by presenting him as John G., he was able to get Leonard to do it for him. In the forward sequences, Leonard gives more details about Sammy Jankis, how he denied the claim by calling his condition a mental problem which his insurance didn't cover. Sammy's wife (a diabetic) unable to cope tricked Sammy into giving her repeated insulin injections until she died.

In the moments before his death, Teddy reveals some facts that throw serious doubt onto Leonard's mission, the murder, his identity and even who Sammy Jankis was. (Teddy claims that Sammy was single and that Leonard's wife was diabetic.) Everyone's manipulating him but Leonard may be doing some manipulating of his own by writing the wrong things down, or neglecting to write down others.

Christopher Nolan makes it clear that he's a major talent here. His use of the fractured narrative to echo Leonard's experience, while ratcheting the suspense at the same time is amazing, particularly since we see the ending first. Guy Pearce plays the part of a man who's perpetually skeptical and uncomfortable yet determined to fit in and accomplish his objective, brilliantly, sustaining belief throughout. Moss and Pantaliano are also great in their wonderfully malicious roles, even acting their character's "acting" for Leonard perfectly.

Ultimately, Memento has a lot to say about the reliability of memory (when weighed against motive) and the importance of purpose (however it's created) to make a life endurable. It's a truly smart and riveting piece of work.
EJAHMFYNKK63
Posted by INDBrent at 10:08 AM

Awesome review, Brent. My favorite part of this flick used to demonstrate the protagonist's problematic short term memory is when Leonard walks into a bar to question the keep, orders a drink, then excuses himself to the restroom. While he's gone, the bartender spits in his drink, and, when Leonard returns he picks it up and takes a sip not even remembering that he ordered it.

Ah yes...been awhile since I saw this film...I knew I was forgetting something crucial in that scene. Thx for reminding me. Going to put this film on my must-see again short list tonight.

This is one of my favorite movies of all time! Love it. Thanks.

Mine too! Thanks so much for checking out the review!

Great review! I also love the scene where he realizes the guy is chasing him instead of the other way around. One benefit of watching the movie several times is catching the subtleties. I know I didn't catch the first time that Natalie put all the pens in her purse before setting him up for allegedly hitting her.

THanks Danna! Yeah the chase moment is great, 'Oh, he's chasing me." The humor adds a lot to the film for sure. I also enjoyed how the hotel clerk tells hi he's cheating him, and Leonard while upset isn't the least bit surprised.
It is one that benefits from at least a second viewing. The first time you may miss a few things because you're not used to the way events unfold!

Haven't seen this film but just saw Inception. Based on your review, I think Memento is more intriguing. Thanks! I'll check this out.

I can't wait to see Inception, but Memento is a tough movie to beat!

nice way to capture the essence, Brent... this is one of my favorite movies!

Glad you liked it Ken!

I have a question for the webmaster/admin here at criminalmovies.blogspot.com.

May I use some of the information from your post right above if I give a backlink back to your site?

Sorry, your comment got caught in the spam filter. As long as you give credit, I don't mind you using anything.

Hey - I am really glad to discover this. Good job!