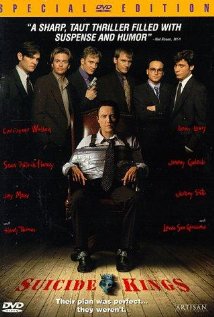 Four spoiled Ivy League college kids decide that the best way to solve a serious problem is to kidnap a rumored powerful former mob boss and force him to solve it for them. You might think that doesn't sound like a good idea and you're right. Christopher Walken is the mob boss, Carlo Bartolucci, now going by Charlie Barret, as he’s now a legitimate businessman.


The rich kids stage a meeting by "accidentally" sitting at Bartolucci's table at his regular restaurant. They're apologetic and respectful enough to set him at ease, even convincing him to let them drive him home. On the ride, they drug him and while he’s unconscious, they tape him to a chair. The kids are so used to being untouchable and in charge, due to their sheltered and privileged upbringing that they can't imagine that this could bring them consequences. They believe it's for a good cause, as Avery's (Henry Thomas) sister has been kidnapped and held for ransom. The kidnapper's are threatening to mail her body parts one by one until they're paid. Knowing that Bartolucci is very powerful, they reason that he can use his connections to get her back from the kidnappers. They promise that whatever happens to her will happen to him, until he gets her back. As Brett (Jay Mohr) the arrogant blowhard of the group tells Bartolucci (while doing his best to try and look menacing,)

"Listen, Charlie. Whatever condition Elise is returned home in is the exact same condition you will be returned to your home. If she loses an eye, you lose an eye. If she loses an ear, you get to lose an ear. If she gets hurt, you will be hurt. Listen to me, by saving Lisa you get to save yourself."
Brett clearly has no idea that he's way out of his league. Bartolucci takes everything in stride initially, offering them a way out, telling them,
"I'm going to give you an opportunity: get out of this. Now. Before it gets so fucked up nobody could ever recover."

Bartolucci soon realizes that they've cut off his finger to match the finger they received from the kidnappers. This upsets him of course, although his reaction is limited due to his being taped to a chair and drugged. Ira (Johnny Galecki), whose house they're using to hold Bartolucci, comes home and is shocked to realize what his friends are doing. They had agreed on a poker night, and not informed Ira about their kidnapping plans, anticipating his neurotic and worried reaction. Ira becomes panicked, realizing who Bartolucci is, but his friends won't listen to his protests.

Bartolucci, meanwhile, is calm as can be, and continues making fun of the boys, Brett especially. He calls his lawyer, Marty, to get information on Alyse’s kidnapping. Marty gets ahold of Bartolucci's employee Lono Veccio (Dennis Leary) who starts collecting information on both kidnappings. Marty soon calls Bartolucci back with information and informs him that there was an "inside player" involved. Bartolucci keeps the information to himself while in a flashback we see the kidnapper's discussing a debt with one of the boys, although it isn't made clear which one it was.
They're forced to gag and hide Bartolucci when a security patrol checking on the property insists on doing a walk through of the property. Lono gathers his information quickly as the boys didn't hide their tracks well at all. He leans on the bartender at the club where the boys met Bartolucci, who gives him what he has and directs him to a waitress who knows more.
The kidnappers are holed up in a hotel. Both are clearly stupid, psychotic and don't get along. One pulls a gun to the other's head and pulls the trigger (without a bullet) for not changing the TV station when he's asked to. We see them together but never see Elise.

Bartolucci asks for details on the kidnapping. He starts with Max (Sean Patrick Flanery) the suave lone wolf of the group who was with Elise when it happened. Max and Alyse were seeing each other in secret as her father didn't approve. Max describes a terribly romantic scene which starts with him getting lost in a bad part of town, and includes a marriage proposal (which is scored by romantic music) The romance is cut short by masked attackers pulling up in a van to grab Alyse. Max tries to go after them but is knocked to the ground.
Complications arise, as the drugs make Bartolucci bleed too much. T.K. (Jeremy Sisto) tries to attend to the problem, as his dad is a doctor and he himself has some medical school. Brett continues posturing and trying to act threatening, having found Ira's dad's gun. Bartolucci isn't impressed, In a moment alone with T.K., Bartolucci starts planting the inside player idea, causing T.K. to grow suspicious. T.K. reveals to the others that the problem is serious and that Bartolucci could bleed to death, as his blood isn't clotting.

Lono locates the waitress at the apartment where she lives with her father. He happens to arrive there as her Dad is abusing her. Lono confronts her father, telling him a story about how he beat his own father with a bat over similiar behavior, and when he doesn't appear moved in the slightest, Lono beats him brutally with a toaster.

Bartolucci gets some time alone with Max and asks Max to end it. Max fills him in on how tough his life is, and the power in the house goes out due to a storm. T.K. and Ira try to find the circuit breaker and discuss the inside player idea alone outside. Ira returns and assures Bartolucci that he'll get to the bottom of it. Marty is also out looking for help. Ira reveals the inside player notion to Max who dismisses it as impossible. Lono continues his search, beating information out of some guys in a strip club with a golf club. He obtains the phone number of the kidnappers. Marty calls them to set up an exchange. Avery tells T.K. that he can't stop thinking of how they cut his sister's finger off, since seeing the image of Bartolucci's finger get removed.
Bartollucci complains deadpan "Guys, if I don't bleed to death pretty soon, I'm gonna die of boredom." convincing them to play poker. Using the opportunity to toy with them, He sizes them up in front of each other exposing their weaknesses. He antagonizes Brett about being a control freak. Brett leaves, clearly rattled and Max takes the opportunity to disagree with Bartolucci, recounting a story about Brett gambling away $20,000.00 in Las Vegas. Bartolucci questions how Brett could pay the money back, reminding them that the interest would be astronomical. Ira and T.K. confront Brett about the debt, asking how he'll pay it back. Brett gets angry and refuses to answer. Avery and T.K. start demanding that they let Bartolucci go. Brett strongly protests, arguing that all criminals are the same.

"It doesnt matter! Theyre all alike! Whoever did the actual kidnapping... It's a fucking technicality!"

Bartolluci reminds them that they're going to pay for what they've done. He tells them a story about some neighbors from the past that he’d made into steaks and fed to their own dogs. This ratchets up their tension quite a bit.

Marty calls to get the go ahead on the exchange and Bartolucci uses the call to leverage them into arranging his own release at a nearby inn. While giving Marty directions to the inn, Max reveals that he knows the area where the kidnapping occurred thoroughly, although he had earlier claimed he didn't know it at all. Bartolluci puts the pressure on Max explaining a possible scenario that would lead to the situation where the kidnapping occurred. Max breaks down and apologizes, saying that he didn't know they'd cut her finger off.

Brett puts the gun to Max's head and starts getting ready to cut his finger off when Avery claims it was his debt, that he arranged it and Max had helped him. Ira gets angry and starts breaking his own things, despite all of his earlier concern over his parent’s things. They tape Ira to a chair to control him, Bartollucci says "Ira, you are the man." Lono has just located them and holding a gun to T.K., who he'd caught outside, he forces a stand-off in the house. Bartolucci directs Lono to shoot Brett in the leg, which he does. When Brett asks why, Bartlucci says, :"It was your idea." Avery continues the stand-off, worried that if they let him go he has no guarantee that they'll get his sister back, not to mention the retribution. Lono treats the group condescendingly. When asked why he doesn’t put his gun down, he simply says with a sneer, “I don’t put my gun down.”Bartolucci leaves with Lono agreeing to keep to the drop off they'd arranged.

Avery immediately runs to the hospital, believing his sister will be there. He's surprised when they tell her she isn't. Lono and Bartolucci are also surprised that she isn't at the hospital and they go visit the kidnapper's to as about this. Lono shoots one of them the leg immediately before they start asking questions. They claim they never kidnapped a girl and Lono soon shoots them both dead. Elsewhere Alyse and Max meet up and the scenario is revealed to be very different than was first presented, which Bartolluci and Lono also quickly figure out.
Suicide Kings is above all, an enjoyable movie. Christopher Walken proves that his delivery is so strong he can carry a movie while taped into a chair. His insults and deadpan wit are impeccable, devastating and hilarious at the same time. It's hilarious to watch him verbally take the boys apart whitout changing facial expression at all. But then, being Christopher Walken, this isn't surprising. Dennis Leary is similarly true to form, caustic and funny throughout. The two make a terrific pair although their screen time together is brief. The boys all play their parts well, each portraying believable rich kid stereotypes with enough personality to make each character a unique contribution to the group dynamic. Peter O'Fallon's directing is perfect for the movie, dark yet sensible with in-story reasoning, using rain and power outages to build the sense of darkness without drawing excessive attention to it. It's a truly enjoyable film which will make you smile, while knowing you shouldn't.
Posted by INDBrent at 9:13 AM

I think the fact that they bring out Walken's character as the 'bad mobster' and then through flash backs show how he took personal interest in his 'friends' saving many of their lives really shines the light on Walken's anti-hero status. Living outside precepts of justice, and delivering his own. So much so that when the shit hits the fan they are willing to go above and beyond for him. Loved this movie, and your review so very much!

Thank you Lisa! Yes I loved the flashback sequences too, it was a great way to illustrate that there was much more to his character than the boys could ever imagine. I really enjoyed his interaction with Ira too, "You are the man Ira. Don't forget it." Clearly a bad-ass but with a lot of depth too!

I haven't seen this one, Brent, but I'm going to get it right away. A terrific sum-up and review.

Thanks Bridget! Yes, by all means do! You'll really enjoy it.

I saw this movie twice---everything but the end. Something always keeps me from seeing the ending.

Well Tirzah the ending really ties it together. Maybe start half way through the next time. Lol