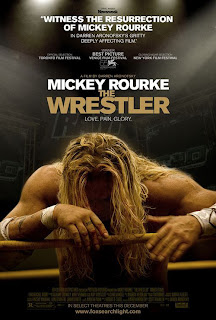 What if you had one thing in the world that you were great at doing, and then you were told you couldn't do it anymore? That's the question at the heart of "The Wrestler" I've heard director Darren Aronofsky compare it to writing, but it could be anything. For this movie we can say that wrestling is what Randy "The Ram" Robinson (Mickey Rourke) feels he was put on earth to do.


While the movie occurs in present day, it lives quite heavily in the '80's, opening with a collage of Ram centric headlines, back when the WWF was the biggest thing going. Ram was a superstar with his own action figure and everything. Nowadays he wrestles in high school gymnasiums and gets kicked out of his trailer on a regular basis for not paying the rent on time. He's addicted to pain pills and has to work a day job at a grocery store for a boss who clearly delights in making sport of him.


Despite the limited crowds for over the hill and beginning wrestlers, Ram and his fellow wrestlers go all out to put on a great show. Whatever indignities his real life offers, the applause and adulation of the crowd make up for. He's also very attached to a stripper in a similar situation, Cassidy (Marissa Tomei) He sees her on a regular basis, and he seems as into conversation as he is into lap dances. Having no other real relationships in his life, Cassidy is as close as it gets.


The Ram is a heavy steroid user, a habit which catches up with him after many years. After one ridiculously tough and bloody bout, he collapses in the locker room with a heart attack and wakes up in the hospital. His doctor tells him that he is not to take steroids or wrestle any more as his heart can't take it.  He takes this in stride at first, planning to retire, but realizing that he doesn't have much of a life to retire to, he reaches out to Cassidy, who despite some real affection, can't get past the customer/performer barrier.


He decides to look up the daughter, (Evan Rachel Wood) whose life he's been absent from since she was small. While it's clear she despises him, he does manage to break through her defenses and share a moment with her. He also takes on more hours at work and tries to setlle into the idea that his life is different now. We soon discover that, like many exceptionally talented people, the Ram's secondary great talent is destroying everything in his life that isn't wrestling, and that the world is not as predictable as a wrestling match. As great as he is at wrestling, he's that bad at life outside of it. When the prospect of revisiting his most famous match comes up, he has to choose which side he's on. As much as you wish he could be happy working at the grocery store, building new and repairing damaged relationships, the character makes us question if that's possible. What if wrestling is the only thing that makes him worthwhile?  What then would be a happy ending?

While the story is a metaphor, Aronofsky understands that for a metaphor to work it has to be authentically the thing itself, in this case it has to really be a story about a wrestler. To that end, he doesn't skimp on the detail, filming what appear to be real matches, using real wrestlers. (be advised there are some gruesome scenes) Combined with the documentary style filming, we feel that this may at times be a behind the scenes look at the wrestling world. We see not only the matches including the blood, but the all but deserted autograph tables, where the ex-greats sell their videos and autograph pictures displaying their wounds and colostomy bags. The locker room scenes, where the same wrestlers who beat each other mercilessly in the ring plan out the beatings together backstage carry a strong sense of brotherhood fell completely authentic.The world of wrestlers and ex wrestlers isn't a pretty one here, but neither is the world of the grocery store, where his manager gets pleasure from watching The Ram squirm. The realistic style adds to the sensation that these are not actors but real people we're watching.


One remarkable thing in this film is the kindness and gentle spirit which the Ram maintains. Despite his many failures and constant threats of irrelevance, he plays his part for the most without complaint. The only times we see anger in him are when some young clients insult Cassidy, (over her age, perhaps hitting close to home) and when he's had enough of working the deli counter, although even there he has to borrow from his wrestling theatricality to manage an outburst. Much was made of this role being Rourke's "comeback," and it's easy to see why. We watch him hurt, bleed, screw up, and endure so convincingly that Rourke may as well be the character. He's a screw up that knows he's a screw up and the only thing that could save him is his talent. His weathered face tells us more about his character than any amount of acting lessons.


Marisa Tomei's commitment is also impressive, playing her part without any safety net. It's an interesting thing to see Rourke and Tomei both playing such physical performers, giving so much physical commitment to their parts. It really drives the reality of it home, that they work in fields which require youth, while being daily reminded that this is fading. While in my opinion, the love interest angle (one scene in particular) was the only part that strained my suspension of disbelief, it made perfect sense in terms of the story. Aronofsky also does an interesting thing, using music from the '80's throughout, to build the idea that the Ram is living in the past. He also got an original song, The Wrestler, from Bruce Springsteen, which closes out the movie in somber and moving effect. If you listen to the song, you get the whole story.

So if you can't do the the thing you love, the one thing you're great at, then what do you do? Can you live with that or is it worth giving everything. That's the question considered here. You may not like the way it's answered, but I thought it was profound, satisfying and honest.
Posted by INDBrent at 6:50 AM

Great write up Brent. You mentioned how Randy was such a kind and gentle spirit - to me that's one of the elements that makes this movie so authentic. In real life, the ones that are strongest physically are often the gentlest- maybe because they don't have a need to prove they are.

Randy, as a character, is also an example of great writing- a classic portait of a man struggling with his past and trying to do good, but having to overcome one hardship after another. Overall, to me every frame seemed true to life.

Thanks Matt! I'm glad you picked up on that too, the spirit of the character really makes the story hit a lot harder.

This is an incredible review! I haven't seen this film yet (as with so many films) but I know it was good and your review has made me determined now to see it.

Emm, Thanks so much! I know there's a ton of films waiting, I have the same problem. In this case though, I rushed to see it because Aronofsky is one of my favorite directors. I'm glad I did too, he hasn't let me down yet! Let me know when you do, I'd love to get your take afterwards!

bee, glad you liked it!

I surely will! Actually, I recently saw three films on Blu-ray that I am struggling to review. Make that four. I have never struggled so much with films before but these were all rather complex films! They are Public Enemies, District 9, Law Abiding Citizen and The Departed.

I hear you Emm! Haven't seen Law Abiding Citizen, but the other three are all some fine work! Let me know if you ever want to do a guest review over here, Public Enemies and the Departed are both on my "have to write up one day" list. (It's a long list)

Ooooh, a guest post might be an idea! I am not very good at getting things one lately though!! Likewise, if you'd like to write something up on the criminal genre and talk about your blog, let me know. I'd be happy to feature you!

Cool Emm! No worries it's an open invite. Appreciate the offer too! I will certainly take you up on your offer at some point here, that sounds like a lot of fun!

Excellent! I look forward to it.

You know I feel both Marissa Tomei and Mickey Rourke were robbed at the Oscars. Amazing performances. The romantic in me still wishes for the happier ended though I understand why it isn't so. Art imitating life.

I would 100% agree with you there! They wer both fantastic. I think everyone wants him to have a "happier" ending, that's why he's such a great character.