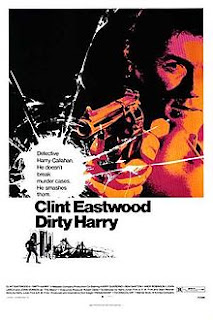 Dirty Harry is Clint Eastwood's first time portraying Harry Callahan, the shoot first and shoot a bigger gun police officer. Eastwood was far from a stranger to playing the anti-hero, but Callahan wore a suit and was just a bit more civilized on the surface than his western characters. A side effect of this is that Dirty Harry was more at odds with the established system than his characters were in the lawless west. Dirty Harry basically wrote the book on the "loose cannon that always gets results" type character.

Dirty Harry sets Callahan against Scorpio, (Andrew Robinson) a killer who opens up the movie shooting an innocent looking young girl from a distance. In a sign of the concerns of the day we also see a plaque at the opening commemorating San Francisco's fallen officers. Scorpio sends the Mayor (John Vernon) a note demanding $100,000.00 in order to stop him from killing again. Harry Callahan is in charge of the case and brought before the Mayor to discuss the note and his progress. His authority problem is quickly established here:

The Mayor: Well let's have it.
Harry Callahan: Have what?
The Mayor: A report! What have you been doing?
Harry Callahan: Well, for the past three quarters of an hour I've been sitting on my ass in your outer office waiting on you!

Harry is forced to interrupt his lunch by a couple of armed thugs in the street. Without even walking fast, he shoots his 44 Magnum at the right places and walks over to one of the thugs and utters his most famous line for the first time:


Harry is assigned a new partner, Chico Gozalez (Reni Santoni). In order to further drive home the "too soft on criminals" threat, Chico is college educated with a major in Sociology. Callahan warns him not to let his college get him killed. Chico asks why they call him Dirty Harry and another officer responds giving Harry an "I hate everybody equally" position, perhaps to preemptively keep Harry's sociopathic attitude from being labelled racist.
Gonzales: There is one question, Inspector Callahan: Why do they call you "Dirty Harry"?
De Georgio: Ah that's one thing about our Harry, doesn't play any favorites! Harry hates everybody: Limeys, Micks, Hebes, Fat Dagos, Niggers, Honkies, Chinks, you name it.
Gonzales: How does he feel about Mexicans?
De Georgio: Ask him.
Harry Callahan: Especially Spics. (Harry winks)

The Scorpio Killer gets back to work as Harry and Chico search for him. Chico scares off some guys beating on Harry, thinking he's a peeping Tom. Harry of course tells Chico to let them go to establish that as mean as he is, Harry only hurts criminals. They soon happen on a jumper, who Harry calmly disgusts into changing his plans by graphically describing what will happen when he falls. They quickly find a murdered ten year old, which saddens Harry into telling Chico, "Welcome to Homicide."

Chico is repeatedly established as a rookie, being left out of conversations between Harry and more experienced officers. They start looking along rooftops, knowing that the Scorpio Killer likes to kill long range with a sniper rifle. Knowing from the note that Scorpio may target a priest, they stake out a rooftop opposite where the best shot at a local priest would be. They do in fact spot him and Harry and Chico and Scorpio shoot at each other from their rooftops. Scorpio giggles maniacally during the firefight establishing his caricature of a sick killer with no redeeming qualities whatsoever. Scorpio gets away and they find out the next morning that Scorpio kidnapped a 14 year old girl, who he'll kill if he doesn't receive an increased demand of $200,000.00. The Mayor scrambles to get the money together,but the chief say "No tricks" This prompts Chico to empathize with Harry, telling the chief  "Now I know why they call him 'Dirty' Harry. He gets the shit end of the stick every time."

Harry is given the ransom to deliver and reminded  to simply deliver the money, no tricks. Scorpio sets up a phone booth to phone booth on foot routine to make sure Harry isn't followed (Chico is following him in the car.) Harry almost misses a deadline when he has to beat two would be muggers who want the bag he carries, but finally meets up with Scorpio who is hiding in the bushes with a gun on Harry. Scorpio in a bright orage ski mask tells Harry he's changed his mind and is going to let the girl die before beating on Harry and getting ready to kill him. Chico shows up just in time and starts shooting although Harry yells not to kill him so they can find the girl. Harry is able to stab Scorpio in the leg with a switchblade he'd taped to his leg. Of course everyone blames Harry that the trade went wrong, but they soon get a report from the emergency room doctor who treated a knife wound and can't remember the guys name but does know where he lives.

Harry and Chico are off to Scorpio's place (the groundskeeper's quarter's at a football stadium) looking for him as Scorpio watches with his maniacal bug eyes, from the darkness. Scorpio is still limping so Harry manages to catch him shooting him across a football field when a guard turns on the stadium lights. Scorpio changes his tune under the gun, crying, pleading for medical attention and his rights. Harry of course just wants to know where the girl is. Harry gets the girl's location from Scorpio and they find the girl's body. He brings Scorpio in, but is called into the DA's office, which is extraordinariliy clean and proper, due to his "unusual police work." The DA chastises Harry for his method's citing contemporary rights cases

District Attorney Rothko: You're lucky I'm not indicting you for assault with intent to commit murder.
Harry Callahan: What?
District Attorney Rothko: Where the hell does it say that you've got a right to kick down doors, torture suspects, deny medical attention and legal counsel? Where have you been? Does Escobedo ring a bell? Miranda? I mean, you must have heard of the Fourth Amendment. What I'm saying is that man had rights.
Harry Callahan: Well, I'm all broken up over that man's rights!

He then informs Harry that their only option is to let Scorpio go free, since they can't try him with no evidence because it was obtained illegally. They even have a Constitutional Law expert on hand to explain it to Harry.

After warning the DA that Scorpio will kill again, Harry stalks Scorpio waiting for him to slip up. Scorpio pays a guy to beat him up badly and gets himself hospitalized, claiming to the numerous press people escorting him into the hospital that Harry Callahan did it. Harry visits Chico who's still hurt from the previous Scorpio encounter, which gives Chico's wife a chance to tell Harry how hard it is to be a cop's wife and Harry then reveals to her that he's a widower.

It isn't long before Scorpio holds up a liquor store and then kidnaps a busful of kids, demanding money from the mayor again. The mayor of course submits to Scorpio's demands and tells Harry not to do anything. Harry then has no choice but to go outside the rules, take over the bus and finish off Scorpio, which gives him a chance to deliver his famous line again "Do you feel Lucky Punk"

As a movie, it's really hard to see past the anti-civil rights propaganda. If every cop was as good as Dirty Harry at picking out the "bad guys" it would be a more sensible stance. Of course, the bad guys here aren't difficult to spot either, just watch for the maniacal laugh. Presenting civil rights as a nuisance getting in the way of infallible cops is a little more than I can imagine. The great success of the movie is Clint Eastwood's character. He delivers bad ass one liners better than anyone and his Dirty Harry has left a huge mark on action movies ever since. Dirty Harry works wonderfully in the world as presented here, if it is a bit removed from ours.
Posted by INDBrent at 8:19 AM

Spectacular choice in movies here, Brent. The 5 Dirty Harry movies are the gold standard in cop flicks, although towards the end there, the storyline did get old and tired. I think this is indicative of the times the Harry movies were popular. The 70s were still mired in rich, white, male folk interested in keeping everyone subservient to law enforcement that could do no wrong.

Miranda v. AZ was in '66 and before it, Gideon (indigent right to legal counsel) was '63. I think the Harry movies were the first to portray stories in pop culture addressing these landmark Supreme Ct. decisions. Later on in the series (I think Harry #3 movie) addressed a female partner on the force.

Thanks Peyton, There's no doubt that the times were on display here! I always get a kick out of the case references as I had to write a few term papers on them. If only the situation was as black and white as it is here!
Don't get me wrong, I love the whole series, but it is pretty skewed!
Realistic point of view or not, it is cool that they talked about them. I think every cop flick since owes something to Dirty Harry!

I never tire of the Dirty Harry films. Clint Eastwood just plays mean like no-one else. His character in Unforgiven is possbly the meanest man ever to be put onto celluloid.
And as you say DH set a bench mark for cop films that follwed it.
It also is a film that shows how lines from a film enter everday usage within society...'make my day'...who hasn't heard someone say that at some time or other?!!

Yes, for a while, every Dirty Harry movie gave us a catch phrase. I'd agree on "The Unforgiven" Nobody does these characters like Eastwood does!