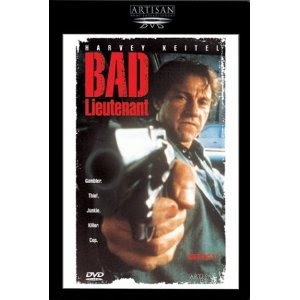 There aren't too many completely unsympathetic characters out there. Even the most irredeemable protagonists in the movies have a trait or two that allows us to latch onto them, whether to cheer a little or feel bad when they take a fall. Sometimes it's just that our flawed lead is more clever, witty or determined than anyone else. Although sometimes entertaining in a morbid way, it's hard to watch someone who has nothing at all to redeem himself. But that is the character we look at in this film.

Harvey Keitel is the "Bad Lieutenant" of the title and he is bad in every way you can imagine. He's a junkie, thief, and killer, with a serious gambling problem. He blatantly uses police power to further his vices. This is a man who can't help but snort cocaine in his car moments after letting his kids out at school. His dialogue with his young kids is also telling. When they blame their lateness on their Aunt taking over the bathroom, he reminds them that he's the boss, not her. He tells them to throw her out of the bathroom or call him and he'll do it.

The Lieutenant responds to a robbery in progress and rather than arrest the robbers, he takes the money they stole and sends them away. He watches a carjacking across the street with no interest whatsoever, rather than interrupt his cup of coffee. He does drugs with hookers in a hotel room, and shoots up with a junkie friend. All of these activities occur within a matter of minutes. All the while, he's placing bets on the World Series, which due to his bad picks, increases his debt to a mafia bookie. He also convinces his fellow officers to place their money with him.

Despite his aggressive tendencies and blatant abuse of power, the Lieutenant is clearly in pain and irreparably broken. He sometimes can't keep himself from moaning. He identifies himself as a Catholic, and Catholic iconography is prominently displayed throughout the film. When a young nun (Frankie Thorn) is raped on the altar by two young thugs, he shows apathy to his fellow officers on hearing of it, yet finds himself drawn in, visiting her (unseen) at the hospital and later spending time at the church where the crime scene occurred. The rape itself is symbolically horrific, even involving a crucifix.There is also a $150,000.00 reward offered to find the rapists.

His  increasing debt is accentuated by the the results of each World Series game, coverage of which is played on the radio consistently throughout the movie. He can't help but sob as he listens in his car, even shooting his car radio at one point. He attempts to conceal the situation from everyone, but his bookie makes sure to give him reminders. In one confrontation, where he reminds the bookie's guy that he's a cop, they remind him that being a cop will only protect him so far and that 'the bookie may well come by and blow up his house. "No one can kill me. I'm blessed. I'm a catholic." he says, before giving the Lieutenant the bookie's direct number, as he no longer wants to be involved. The bookie's guy reminds the Lieutenant of the reward for the rape case as a possible way out.

His anxiety increasing, the Lieutenant runs deeper into drugs, alcohol and depravity, his debt and the rape case clearly pushing at him constantly. All the while, reminders of his faith are everywhere, like Jesus watching from a blanket draped over a couch and rosary beads in his car. To balance his turmoil he continually turns to drugs and alcohol, Retreating to his fellow junkie and mistress Zoe (Zoe Lund), she offers this commentary on his dilemma while helping him shoot up:
"Vampires are lucky, they can feed on others. We gotta eat away at ourselves. We gotta eat our legs to get the energy to walk. We gotta come, so we can go. We gotta suck ourselves off. We gotta eat away at ourselves til there's nothing left but appetite. We give, and give and give crazy. Cause a gift that makes sense ain't worth it. Jesus said seventy times seven. No one will ever understand why, why you did it. They'll just forget about you tomorrow, but you gotta do it. "

He meets with the nun shortly afterwards and tells her that if she gives up the names of the guys who raped her, he'll punish them. He begs her to let him "revenge it." The nun responds by telling him that she has already forgiven them. He can't accept this and even asks her if she has the right to forgive them as her forgiveness will "leave blood in its wake." by allowing them to do this to others. She tells him to talk to Jesus and pray. The Lieutenant is completely overwhelmed at this gesture, and actually sees Jesus appear before him in the church. He finally faces some of his torments, initially accusing Jesus and finally revealing his guilt in what may be in my opinion one of the most moving acting experiences I've ever seen. Click the link to watch it:

Instantly after this experience, someone directs him to the boys who raped the nun, In a strange twist on ritual, the Lieutenant corners the boys in their room at gunpoint and smokes crack with them, as perhaps his own version of communion. (The World Series plays in the background) As if to confirm the authenticity of his new understanding, he escorts the boys to the bus station and tells them to leave town rather than arresting them. He reveals his continuing bafflement, addressing the boys on the ride to the bus:
"You raped a holy thing. You destroyed that young girl. And she forgives you. Ya hear that? She forgives you. You fucking heroes. Ya like holding her down and shoving your dick into her? While she couldn't do nothing about it. Did you like that? Watch this motherfucker! Watch this you cocksucker! Look at that! You can't do a thing about that can you? Can you? Look at me! Can you? Can you fuckface?"
He doesn't completely understand what's happened but it has profoundly affected him. He moans in misery watching them get on the bus. We might wonder if he's really changed or just glimpsed a moment of grace, but it's clear that the consequences of his actions are still waiting for him. How much is one moment of forgiveness or goodness worth? I don't think that's the point, so much as a representation that this man, as far as he had fallen, was not beyond a moment of grace.

Be advised that this film is quite graphic and not for the easily disturbed. But if you can tolerate that, it's a true masterpiece. Ferrara mixes the iconic in his gritty scenes in a way that's almost surreal yet completely believable. And Keitel's performance can't be compared to any other in it's commitment and vulnerability. He's astonishing.
Posted by INDBrent at 12:10 PM

Re the chem & substances abuse, it sounds like Keitel is channeling Nick Cage when he was chugging himself to liver failure as Ben Sanderson in Leaving Las Vegas.

Your review is probably a hell of a lot better than the movie, Brent - I'm curious about something - How old are Keitel's kids in this flick? Keitel himself seems to be rather long in the tooth to be playing a generic PD LT with young children.

Yeah Peyton, the levels of substance abouse are certainly very close between the two of them! Maybe that's why they picked Cage for the new Bad Lieutenant movie!
I'd agree with you as far as the kids being a little too young for him being his age, but I had a friend once, whose parents were about that far apart, so maybe it doesn't stand out to me.
I may be wrong but I think one of his actual kids is in the movie.

Late to respond but I just rewatched this film. Keitel's acting is amazing. I wouldn't call the character completely unspympathetic. He is suffering and his suffering drives him to extremes. What about the character's final act--sort of amazing--don't you think? A moment of forgiveness is worth everything though not enough to save his life.

Hey!
I have watched this movie 3 times, and its really an awesome movie.
Thanks for sharing

Hey Lana! I do feel his character is unsympathetic. Yes, he is suffering and we do feel something for him. For me that's pity though, not sympathy.The Lieutenant is as bad as it gets. He is truly "bad" in my opinion. That's what makes his pivotal point so amazing. He is in pain, very much so, and thanks to Keitel we feel that. His performance is truly brilliant. We really see the humanity in this guy. I thought they chose well, picking a crime that was unforgivable by most standards. Of course it's not enough to save his life, but if it had saved him would his moment have lasted or would life have caught up with him again and dragged him back? That we believe someone so corrupt is capable of such an act is truly a testament to Keitel!

It is such a great film! Glad to have you reading!

I've seen this movie countless times, it's one of the best I've ever seen. I have a quick question I was hoping you might be able to answer: toward the end of the movie, some folks give the Lieutenant $30K and an older lady blesses him, do you know why?

I believe he's taking money to bet on the next game. The old lady blesses him because she's convinced that he's going to make them rich.