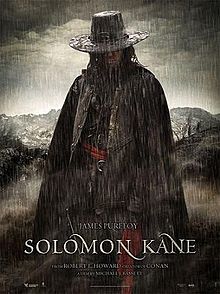 It's a complicated thing to see one of your favorite fictional characters get a makeover. This is especially true when it's an obscure character that on the one hand, you'd love to see get more recognition, but on the other, you'd kind of like to keep for yourself. Honestly, if Michael Bassett's recent "Solomon Kane" film had portrayed the character I remember from my childhood, I would've been overjoyed, but I realize that may not ever have been possible. Competing with nostalgia and remembered childhood imagination is a difficult task for anyone. Even with all the presumably audience inclusive tweaks he made to the character, it took years for the film to be released for US viewing, and even then without a real theatrical release.

While I was disappointed with the film, it wasn't all bad. James Purefoy gave a decent performance covering the character visually as well as you could ask. His tone for the most part felt right and I enjoyed watching him do what he could. He can carry the hat and cloak and seems comfortable sword fighting  There were some interesting visuals in the film, the dark tones, and somber atmosphere all hinted that they had some idea what they were aiming for. The opening scene with Kane as a greedy and fearless pirate captain set it up very well, but from there it lost direction, or at least the direction I wanted to see. I understand that the film has to be an access point for those who know nothing about the character, and as such the film feels the need to include both a current adventure and the "origin story." It's no mystery that a problem arose here, since Solomon Kane, never had a real origin story, just hints about his past. Mind you, I'm no stickler for devotion to continuity, provided the changes a writer makes make sense, and feel true to the character. Unfortunately a couple details here were completely against the character's nature. They gave him an origin story, and it was a mundane one.

Anyone familiar with the character (before this film) when asked to describe Solomon Kane will before very long tell you he's a Puritan. I would even go so far as to call him a Puritan on overdrive. Yet here, we're told that he was the son of a Lord, and was supposed to go into the priesthood while his older brother assumed his father's title. When he's confronted by "the Devil's Reaper" he gives up his Pirate's ways and retreats to a Catholic monastery. At some point, he meets a presumably Puritan family, and after some slaughter he gets his Puritan looking hat and cloak from them to chase down the evil doers. This in no slight against the Catholic church, but I'm sure they'd be happy to agree that Puritan's were not very Catholic at all. Wearing a Puritan's clothes doesn't make you a Puritan either. Known for being strict in accounting for all aspects of their behavior, including the limiting of affection. They're known for coming across as severe and uncompromising in most respects. These are characteristics which Solomon Kane displayed very well. Devoted to punishing evil, he would pursue each cause obsessively until it was concluded. This is not a guy you'll get a smile from and also not a guy who would hide out in a monastery, and not one to use two words when one will do. There's also the fact that Solomon Kane suffered a bit due to the Inquisition.

He's also given an odd family back story  He's the second born son but wants no part of the family name. As a child, his father tells him if he leaves, he's not to come back. We see that his older brother, Marcus (Samuel Roukin)  is a cruel thug, and when Solomon interferes with him abusing a young lady, they have an altercation which leads to his brother falling off a cliff to his seeming death. This history is revisited later, as we learn that the main bad guy, a Sorcerer named Malachi (Jason Flemyng) struck a deal with Solomon's father, who unbeknownst to Solomon had found his older brother alive but horribly disfigured. He offers Malachi everything he has to restore Marcus as much as possible. He does this and Marcus starts working for him in a Darth Vader/Emperor kind of capacity. This was done I suppose to give the final confrontation a more personal angle. With some characters I'd buy that, but the character of Solomon Kane is only diminished by this weak family story. Robert E. Howard's Kane would kill his father or brother without hesitation if he thought they were evil doers. If the goal was to give him guilt, there was plenty of opportunity from the initial set up.  We can imagine all sorts of misdeeds while out raiding and plundering.

The last big error in my estimation was the handling of the whole "redemption" part of the plot. To sum it up, at the beginning a demon called "The Devil's Reaper" confronts him and tells him he's damned and hell is out to collect his soul. William Crowthorn, (Pete Postlehwaite) the father of a Puritan family he meets on his travels is killed by agents of Malachi whose goal is to kidnap the man's daughter, Meredith (Rachel hurd-Wood.) Kane kills many of them, but they get away with Meredith. With his dying breath. the Puritan tells Kane that if he saves his daughter he'll be redeemed. Kane promises to do this. In the final confrontation, Kane defeats his brother Marcus, and then turns his attention to Malachi, who uses Meredith's blood to release a huge demon from a mirror to claim Kane. As the demon is about to kill Kane, he shoots Malachi, causing the demon to be absorbed into the mirror after a brief lightshow. He tells Meredith that like her father said he knows he's redeemed now. Ending the movie he announces that he'll be out fighting the dark forces from now on. Once again, I found the reasoning to be pretty ill fitting. While Solomon Kane has had some supernatural assistance, a quickie redemption seems the easy way out. Kane always believed himself serving a higher purpose, and the intensity of his efforts to combat evil were those of someone seeking redemption certainly. To give him redemption at the start of his evil fighting career is a bit anticlimactic. An already redeemed man wouldn't be as driven as Solomon Kane.

As far as the technical aspects of the film go, it's watchable. They obviously went to a lot of trouble to include some visual period detail. Some of the dialogue is clunky and several of the action scenes are underwhelming and the CGI work just has to be accepted as what it is. It makes it's point well enough, and may entertain, but won't astonish you. If you aren't as invested in the character as I am, you may enjoy it a bit more. I firmly believe that the character could do well as originally envisioned. Certainly many period pieces do well, and the supernatural elements of the stories could be appealing. It may be difficult to have as unsympathetic a main character as Solomon Kane, at least one that doesn't throw out witty one liners. Let's face it, Puritans, especially obsessed ones are not the the most fun characters around. He's not about fun though, just an uncompromising devotion to destroy evil where he finds it, whether in the form of a pirate, vampire, or demon. It's comforting to see his resolve tested and know that he doesn't break. Solomon Kane is a guy with a sword and pistol (and a mystical staff, but no need to get into that here) who is every bit as cold and ruthless as the evil he pursues. They even got the character down pretty well in the opening, Kane refusing to budge from his quest even as his men are getting pulled into mirrors by demons. It's just too bad they decided to soften the character, once he'd "turned to good." Some character work better with a little mystery behind them.

I can't say I didn't enjoy it at all, but I wanted to like it more. Just the fact that I can say, "The Solomon Kane movie" makes me a little happy. I only wish it had been more true to the character, or done so well that I wouldn't notice the character issues. If the character interests you and you'd like to get a better take on what he's all about, the Howard stories are a good place to start. While he's never enjoyed widespread popularity, his influence is seen in nearly every hunter of the supernatural (Vampire Hunter D's outfit or the 2004 version of Van Helsing.) One great benefit of the film release is that they are much easier to find now:


He can also be found in the reprinted Black and White back up stories from Marvel Comic's "Savage Sword of Conan" magazine. That's where I first ran into him. He also had several Marvel Mini Series which were exceptional and in color!

And lastly, Dark Horse Comics is doing wonderful things with Solomon Kane these days, completing some of Howard's story fragments and staying true to the character that Howard created, rather than filing the unpleasant edges off.

Posting my thoughts from when I watched this:

Don't be fooled by the looks and start thinking it has aped Van Helsing…for when Solomon Kane was in action Van Helsing wasn't even born!

Kane is a mercenary and a courageous warrior but his violent ways lent his soul to the devil. The devil’s reaper is hot on his trail. He gives up violence and becomes a sort of monk in a church. Soon he is ousted from there and lives bitterly to see brutal ending of his loved ones. Overcoming his guilt and realizing god created him to be violent so that others can live in peace, he takes up arms again. In the end he has to go back where it all started--to his abandoned home, and face the devil's reaper.

Movie looks more like an introduction of Kane to the audience. James Purefoy was born to be Kane. Promises for a much better sequel.

thanks for sharing those! It certainly could set up a better sequel. The origin details just didn't work for me.

He sounds rather interesting, but I have never ever heard of him. I love James Purefoy so I will have to check this out at some point. I can't wait to see Purefoy in serial killer mode on The Following with Kevin Bacon this January.

Thanks, Mel. Kane never got nearly the attention that Conan did, but he's a great character. I'm also looking forward to the Following. Looks like some amazing TV!