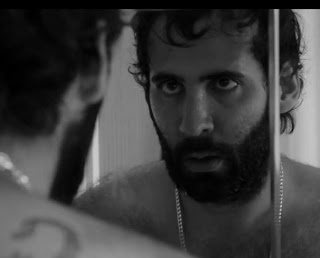 I'm always excited about indie film. While I can't keep up with everything out there. It's still inspiring to think of all the people out there telling stories with whatever resources they have on hand. Twitter has become a valuable source of information for new indie projects, and that's how I heard about Tim Porter's latest project, "Joshua."

At just over 15 minutes long, it's a quick watch, but it packs quite an impact in that amount of time. The lead role of Joshua, is played convincingly by Cyrus Trafford, who puts himself into some seriously uncomfortable shoes. It opens with Joshua, sitting on his couch watching a kid's TV program. We follow him on the ride to work, and hanging out with his roommate. Joshua narrates some details about himself, "I've always had a way with girls" he tells us on a bus ride. "I always know what to say, how to say it."  He tells us how many guys complain about interacting with girls, but he's never had that problem "until now." Joshua works as unskilled labor on a construction site.

He meets up with a friend, Paul (Christian Okoli) and they discuss what kind of DVD to rent before heading to the park and failing badly to interest a couple of women. Joshua tells us in narration that he saw her last night and that "she's the most beautiful girl I've ever seen." Despite his earlier boasting about :knowing what to say" to women, the best line he can come up with is yelling "Do you fancy a drink?" from a distance. Of course, they don't really fancy a drink. And these aren't girls, but women.

We revisit his apartment, where the children's TV show plays, and he tells us about  the one problem this perfect girl has. From there, it starts to become clear that Joshua isn't as normal a guy as you might have thought. In fact, we're dealing with someone seriously deranged. Although, the terms are often used interchangeably, in this case, there is a real difference between "women" and "girls" When we finally realize what Joshua is talking about, his slightest gestures are enough to make your skin crawl. And from there it gets worse. Not that we're shown anything graphic or lurid, but with what we know of the character, touching a knee is enough to be revolting.

Cleanly shot, and easy to follow with very natural performances, Joshua is very well put together. Even the voice over technique is used wisely, giving us an effect that wouldn't be possible otherwise. This is a film about a sexual predator and his profoundly disturbed interior life, so while it looks good, it may not be an easy one to watch. As uncomfortable as it may be, it's an examination of something that really happens every day.

I admire Porter's effort to look at the problem from this particular angle, because it's easy to imagine characters like Joshua as monsters that anyone could spot a mile away, but the truth is unless you're really looking, they don't look that different from anyone else, which is likely why they're always caught too late. "Joshua" is not a great pick for escapist fare,  but very well done for what it is. The film's approach recalls to me  this Leonard Cohen poem:

"All There Is To Know About Adolph Eichmann"

What did you expect?
Talons?
Oversize incisors?
Green Saliva?

In this case, it isn't a Nazi of course, but another kind of monster, just as apparently human.

Here's a link to the film, if you'd like to watch it for yourself. I appreciate Porter, Trafford, and everyone involved for tackling a subject, which although commercially limited, is important nonetheless. Stop in and let them know what you thought.


Joshua from Tim Porter on Vimeo.
Posted by INDBrent at 2:59 PM

Nicely, done, Brent. And this is exactly why indie art is refreshing - you get to choose what *you* think is interesting, not some schmuck sitting in a corporately consolidated mainstream publishing house or movie studio.

Thak you, Peyton. Absolutely, it's nice to see what stories people will tell when it isn't all about the money.