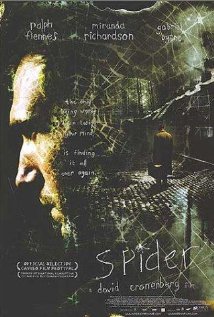 Spider is a fascinating movie, although not an easy one to watch. Ralph Fiennes is astounding as Dennis Cleg/Spider, a schizophrenic man trying to get back into society after being institutionalized for many years. He is surprised to find that the boarding house he's staying in is right in the neighborhood where he grew up. Wandering around the neighborhood, he happens to look inside a window, and is compelled to watch a little boy interacting with his mother. We discover that he is in fact watching himself as a boy. We see his mother telling young Dennis about Spiders, Dennis takes to making webs out of string, thus she gives him the nickname, Spider.

I'm being careful not to give too much away here, as the film depends on a slow unveiling of details to work, but I can say that Dennis/Spider revisits his past many times. The effect of having Spider watching his memories as they occur again in front of him is nothing but remarkable, enabling us to have flashbacks while at the same time continuing in the present. It's like an extended version of those scenes in "It's a Wonderful Life" except with no angel, and no happy ending on the way(we already know where Spider ends up in the future.)

Fiennes' Spider is a badly broken man. He constructs routines to try and stay cohesive, coffee at the same time in the same seat, solves puzzles, smokes obsessively and scribbles strange symbols in a notebook. His desperation is riveting and unsettling. We watch his routines change (and his reactions to changes)as he becomes more immersed in visiting the past. Spider rarely says a word but we watch him clawing to express some mystery that he can't quite reach.

Miranda Richardson also does an amazing job here as Spider's loving mother as well as another part which I'll recommend you don't even think about until after you've watched it. But I will say the performance is brilliant and you'll see why. Gabriel Byrne is Spider's father, a pretty affable guy (at first) who likes to hang out at the bar. His character has a lot of ground to cover with not a lot of screen time, but he covers it all and drives home a heartbreaking scene. (Which again I won't talk much about)

Director Cronenberg knows how movies work, and he knows what we expect. We can't help but feel for Spider as he tries to navigate his own mind to fix what's broken. Watching his sincere urgency as he tries to step into the past is almost physically affecting. We so badly want him to solve the puzzle and the mind to fix itself. Puzzles and webs are central to this movie, and tellingly, in one scene, they are both the same. Every detail in this movie feels intricately planned to lead us somewhere. Just keep in mind that we are being led by Spider, who may not be the most reliable guide. It all makes sense, but not the way you want it to.

Be forewarned that again, this is a challenging movie to watch. If you're uncomfortable with watching serious mental illness, do not watch this film. This movie is not any relation of "A Beautiful Mind" There are no monsters, and not much really happens but I think of Spider as one of the smartest horror movies ever made, intricate and intense in its measured unfolding.
Posted by INDBrent at 7:29 PM

Excellent review and summary of a very complex film. I really liked some of the cinematography in it, too - for example when Spider is walking the streets of (I think it is) Limehouse, near where he lived as a child.

Thanks! Yes, agreed, the cinematography is terrific. Beautifully shot but it's easy to overlook as it's designed to blend. The streets are so moody and desolate it really works for the mood.

I'm really looking forward to seeing this one again. I agree about the cinmematography. It is striking. I may blog about this film sometime too. Hope you don't mind.

Lana, No I don't mind in any way. I'd love to read what you have to say about it. It's such a great film, the more attention it gets the better!

Finallly, a review of a movie I haven't seen or seen reviewed 18 times. The review made me interested in it. Can you watch it online, I wonder? Due to my health, I'm not supposed to go out much. Sometimes you find a tasty movie that everyone seemed to miss and it's all the sweeter because you didn't have to share.

Thanks for your feedback. Here is a link to one service I found:
http://www.zml.com/search/advanced/?string=Spider&type=movies
It appears legitimate to me, but be advised,i know nothing about the service only that they're the only service I found offering Spider, that doesn't appear to be too shady.
You can certainly get it through Netflix, although the prices Amazon is offering may be cheaper than a rental. That's good for customers I suppose, but it's a shame that this fine a film is only commanding $2.00!

Totally agree about finding the movies that everyone missed, it definitely adds to the enjoyment.

This was a great movie even though at times it was difficult to watch. To me, this was one of Cronenberg's finest movies amd one could learn a lot just by watching it.

Yes I agree. While he's mostly known for his "body horror" I found this the most frightening thing he's done. I think that schizophrenia aside, it really says a lot about the power we have over memory. Thanks for reading!