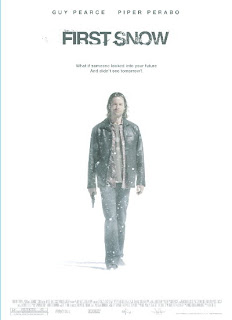 First Snow feautures Guy Pearce as Jimmy Starks, an ambitious and confident salesman. He's the kind of salesman that bases everything on a firm handshake and critiques everyone's salesmanship whether bartender or fortuneteller. As a salesman, and a big fan of Guy Pearce, I may be a bit biased but I found all these traits helped round out a likeable character. Starks doesn't wish anybody ill, but his fault is that he's only out for himself. His surface is pleasant but shallow. He's a good flooring salesman, with an ambitious plan to sell jukeboxes, which he needs to raise money for.

Starks' car breaks down in a desert in the middle of nowhere and in order to pass the time, he visits a local fortune teller with a cardboard sign propped outside his trailer. The fortune teller (J.K. Simmons) predicts a windfall from Dallas, and an impossible outcome for a basketball game. Starks ask him to dig a little deeper, offering to pay more than the normal fee, all the while, commenting on the act. The fortune teller takes his hand and then appears to go into a seizure. He refuses to answer any questions and even refunds Starks money, insisting that the session is over. Spooked but also skeptical, Starks writes it off, until the unlikely predictions both come true.

Unpleasant things start happening (hang up calls, death threats in the mail) and Starks can't shake the experience with the fortune teller, assuming rightly that the fortune teller's seizure means he saw the end of the road for him. He visits the fortune teller again and forces the information out of him at gunpoint. Simmons is terrific in this role, by the way. He exudes a gentle cheerfulness and quiet knowledge that make his character completely believable. Even faced down at gunpoint he is graceful and only wants to help. He tells Starks that he's safe until the First Snow. "think of it as a gift. most people don't know." he says, but Starks, of course doesn't agree.

Starks sets out to find out what will supposedly kill him. He rules out his heart murmur after a check up. He then confronts a fellow salesman that he had to fire recently, (Rick Gonzalez)and learns that an old friend and business partner who has good reason to despise Starks, was released from jail early on parole.

His paranoia grows as he tries to track down the cause of his upcoming demise. However this is certainly a case of the observer affecting the observed as his efforts to stop his fate only seem to create more danger. Whether or not he can escape his fate, he does manage to set some things right on the way. His bad side and good side are both magnified and you can't help but to hope he figures it out. I enjoyed the character study more than the thriller aspects of the film as Pearce gives Starks a complexity that makes his journey riveting to watch.

Solid acting all around, even the minor characters were great,including William Fitchner as Starks' fellow salesman who unsuccessfully tries to talk down his paranoia, and Piper Perabo as Starks' girlfriend Deirdre, who doesn't know how to deal with him falling apart. Writer/Director Mark Fergus delivers a solid, engrossing film.
Posted by INDBrent at 1:27 PM

I just watched this movie on Netflix. It was good. You are a great writer! Thanks for the tip. It was a good movie. A little heavy, but whatever...so is life.

Cool Lindsy, glad you enjoyed it! It is definitely pretty heavy but I think it gives you a lot to think about and the character is so interesting, you really want him to make it work.