The Last Life in the Universe 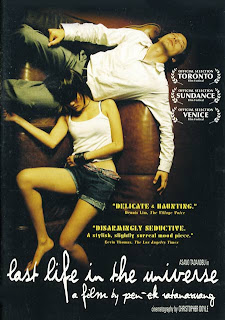 The Last Life in the Universe is easily one of the most textured movies I've ever seen. This film is deeply sad, vulgar and beautiful all at once. While many drastic things happen in the movie, they all seem to happen quietly as if in a dream or meditation. While there are questions of what happened or didn't happen, it ultimately didn't matter to me as I believed the emotional world the characters lived in. Visually there are so many stunning scenes in this movie that I think it would almost work as a picture book. The lighting and soft but full colors work together brilliantly to accentuate the dreamlike quality.

It's the characters that really make it connect though. Kenji(Tadanobu Asano),the main character, is an introverted librarian who constantly plans different suicides and has some connection to the Yakuza. When an act of violence compels him to leave his home, he heads for a nearby bridge to consider jumping off, only to witness two sisters having an argument which ends with one sister getting out of the car and run over by passing traffic. Kenji wants to leave town and Noi(Sinitta Boonyasak), the surviving sister, has a place to go and doesn't want to be alone. Of course Kenji, a compulsive neat freak, soon finds that Noi has no concern for neatness at all and he soon cleans the towers of used dishes and other filth until the place is spotless. (the clean up scene is amazing) From there, we learn that Kenji and Noi are complete opposites. She's as reckless as he is careful. They don't even speak the same language and can only communicate verbally because each knows a little English.

The real triumph of this movie is that these two characters find a connection in each other's loneliness. While many movies would have pushed the romantic angle, this is not that movie. Their bond is much deeper than romance, language or philosophy, so much so that it seems they form their own world inside their shared grief and loneliness. It's a temporary world, and neither intends to fix the other. But I find it a wonderful idea that the two could make this space where the outside world is irrelevant, and they can exist together with their pain suspended, even if only for awhile. This world is so complete that Noi even changes places with Nid (Laila Boonyasak) the dead sister, and it doesn't feel out of place.

While the characters are not repaired, they are changed by their meeting. THe sense of warmth that develops between the two is impossible to convey. Both actors do an amazing job bringing so much emotion to understated performances. Although their relationship is physically nothing more than sitting on the couch together, in this film that is a remarkably beautiful thing. Even the small details seem perfectly planned, like the book Kenji carries around called "The Last Lizard" which is a children's book, that as the name suggests, is about a lizard who wakes up and realizes he's the last one. the orange Kenji drops into the water while planning to jump, the palm trees around the house, and I'll stop there. This movie touches a particular feeling so deeply that it's overwhelming, especially since I can't recall another movie touching it at all. Director Pen-ek Ratanaruang has created a unique masterpiece.

There are also shootings, chases, escapes and ugly incidents. Of course the story has to end, but the ending is open enough that even if you don't believe in happy endings (I don't imagine that Kenji or Noi really do) you can have some hope that it isn't all bad.
Posted by INDBrent at 7:35 PM

I concur that the loneliness here is acute, and the relationship between the characters, touching. In a way though, I think it is ultimately a tragedy for the very reason that no one person can fix another. The film bares this truth. Brutally so.

I agree with your assesment completely. It's certainly bittersweet but that makes the consolation and connection more rare and precious.

Just added the film to my Netflix queue -- thanks for this very intriguing recommendation, and congrats on launching the great blog!

Thanks Jeff! No matter how many times I watch this one it never gets old. Let me know what you think when you've seen it.