Sergio Leone and the Anti-hero Epic 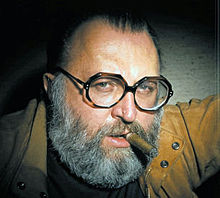 Many directors manage to put out a brilliant film or two in their careers, but not many manage to raise the bar nearly every time out, even when faced with obstacles like minimal budgets and not speaking the same language as your actors. Sergio Leone was not your average director. He was fortunate enough to start his career, assisting on Vittoria DeSica's masterpiece "Bicycle Thieves" one of the most powerful films ever made. From there, he did a lot of writing and work around film sets, until he got the chance to direct his own films. He quickly ended up tackling a declining genre, the Western film, giving it a different spin than most were accustomed to seeing.

Many were tired of the preachy moralizing white hat and black hat messages that worked in simpler times. Leone's subversion struck a chord and before long many other low budget film makers saw the possibilities in his approach, spawning a large number of "Spaghetti Westerns" which showed a very different side of the old west and created a new and gritty mythology, populated by characters like "Django," "Trinity," and "Sartana." The public appetite for this new brand of anti hero seemed to mirror the popularity of gangster pictures years earlier, giving the public a character that seemed to fit the times by admitting that the illusion of the old morality in the Westerns didn't suit the growing cynicism they felt about the world. Leone's outlook was largely due to the fact that his outlook on the cowboys was that of an outsider, a European examining the American gunslinger. While a certain admiration comes through, so does a feeling of brutality, an astonishment at the level of violence, happening in a very recent (to Europeans) time. 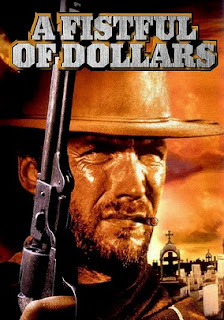 Leone's "good guys" were not pure and virtuous. A quick look would not be enough to separate his"Man With No Name" from his adversaries. Leone's hero was a survivalist above all else, not working for truth, justice, or a greater cause, but his own independence, following a code which was only known to himself. While he typically ended up on the right side, that was only because the bad guys were disloyal, unnecessarily brutal and too greedy for their own good. Clint Eastwood was the perfect actor for these roles, his stoic squint, a promise that this cowboy wasn't from the John Wayne or Roy Rogers school of ethics. This character worked so well he was soon ingrained into public consciousness, becoming one of the most iconic film characters of all time.

Leone found himself a winning formula, inexpensive Spanish settings, Clint Eastwood, and the scores of Ennio Morricone. "A Fistful of Dollars" paved the way for "A Few Dollars More," and then "The Good, the Bad, and the Ugly" each doing better than the last. Each element was in it's place and they all worked beautifully together. Each film became a classic in it's own right and together they make up the best Western trilogy ever made and and a cornerstone in the evolution of the film anti hero. Eastwood himself hasn't shed that image yet, his later westerns, Dirty Harry, and even the Clint Eastwood of "Gran Torino" still recall the "Man With No Name." 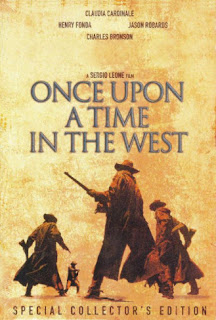 While the Dollars trilogy would have been enough of a contribution to cinema for anyone's lifetime, Leone wasn't quite finished with the Western. Although he had his mind on making a different film (which would eventually be "Once Upon A Time in America") his success with the westerns made the studios eager to have him make another. Leone turned to Charles Bronson, one of the few actors who does stoic better than Eastwood, as his hero, and to Henry Fonda, playing shockingly against type, as his villain. Retaining Ennio Morricone, whose brilliant score helped keep the film in the same western universe, he made "Once Upon A Time In The West" a look at the conflict between progress and the old Western codes. Once Upon a Time In the West" became a kind of love letter to the Western genre, and referenced nearly every great American Western while telling it's own story. This was not just a movie, but an epic, impossibly large and full of breathtaking shots and scenes, including perhaps the best final showdown ever, consisting largely of Bronson and Fonda's staring at each other, making the final draw seem a relatively minor thing. It showed a side of the West that had been largely overlooked, except for the popular revisionist stories such as "The Alamo." "Harmonica" Bronson's character was a Mexican man in conflict with the all American Fonda, although their differences were entirely personal rather than cultural. 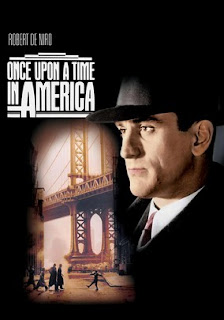 And again, if Leone had stopped there, his legacy would've been tough to match, but he still had years to go. Eventually he got to make the picture he'd been planning for years, even turning down a chance to direct "The Godfather" to do so. "Once Upon A Time in America" was a another epic, this time centered on the rise and fall of a group of Brooklyn gangsters. The story is told in three different time periods, the 20's, 30's and 60's and we see the times change in the life of "Noodles" Aaronson (Robert DeNiro) and his associates. While it's a very long film, it's also in a class of it's own, and as far as gangster films go, it doesn't get any better. Sadly, the epic was too much epic for the studios and they cut and shortened it until the story didn't resemble itself anymore. Luckily enough people noticed this, and the original has been available for some time now in all its intended glory. "Once Upon a Time In America" marks the change in American character since the old west, showing Leone's sentiment when he remarked, "In my childhood, America was like a religion. Then, real-life Americans abruptly entered my life, in jeeps, and upset all my dreams. I found them very energetic, but also very deceptive. They were no longer the Americans of the West. They were soldiers like any others; materialists, possessive, keen on pleasures and earthly goods." Noodles had little in common with Harmonica from Once Upon a Time In the West." or the Man With No Name, he was a ruined man, making a last effort to figure out why, and even that effort has to be viewed skeptically.

Leone wasn't done working of course, but he died in 1989 while planning another epic, this time a World War II epic about the siege of Leningrad. I think it's safe to say that cinema today would be a very different thing without Leone's contribution. He was quoted as saying “When I was young, I believed in three things: Marxism, the redemptive power of cinema, and dynamite. Now I just believe in dynamite.” a sentiment unsurprising from such a champion of the anti hero, although I'm sure that many film lovers would disagree with it, particularly when it comes to the impact of Leone's work. Judging by the abundance of anti heroes in our modern movies and top tier television, Leone's "Man With No Name"  is still needed. Happy Birthday Sergio. I'm glad you were here.

Email ThisBlogThis!Share to TwitterShare to FacebookShare to Pinterest
Labels: A Fistful of Dollars, and the Ugly, Charles Bronson, Clint Eastwood, For A Few Dollars More, Once Upon a Time in America Robert DeNiro, Once Upon a Time In the West, Sergio Leone, the Bad, The Good