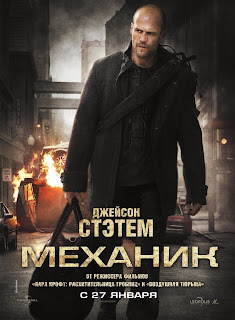 It's no surprise to anyone that every possible property seems to have a remake in the works. I try to stay open minded,

as there are certainly some stories that ask to be "modernized" Obviously for studios it's a dollars problem, easier and safer to market a name that's already known and possibly loved than risking a lot of time, money and effort familiarizing us with a product that we may just choose to reject for whatever reason. It is a business after all, so that makes sense. So, I watched the recent remake of "The Mechanic" with as open a mind as possible, considering I loved the 1972 Michael Winner original starring Mr. Charles Bronson. I did a full look at that one in a past entry here:

I don't think the 2011 movie is a bad film necessarily. Jason Statham is a reasonable action hero, and it's a reasonable action movie. Most of the main plot elements of the original are brought over to the remake, Jason Statham is Arthur Bishop just like Charles Bronson was. However, the two Arthur Bishops have very little in common, aside from the fact that they are both renowned hit men. Statham's Bishop is not a man trying to assert his independence and comfortable with the idea of his own death. He actually comes across as a pretty lighthearted guy that just happens to kill people. The meticulous planning ritual that Bronson's Bishop underwent for every job are lightened up, save for the knowledge that Statham's does have a planning board and a record player. Where Bronson gives us a heavy thinker, swimming in existential angst, who doesn't miss a detail, Statham is a man of action who tries to be careful. Bronson is a skilled technician. Statham is a competent professional. THere's a big difference. The difference in the opening scenes tells us all about it. In the original, Bronson set up an elaborate hit with many moving parts and executes it skillfully and precisely. In the remake, Statham waits for a guy in his swimming pool and drowns him. It works but is hardly artistic.


Another element missing in the remake is the sense of "ties" between everyone. Like Bronson, Statham is required to kill an old friend/mentor figure. In the original we were shown the deep bond between the two characters, just by the way they interacted, and the shared anecdotes, the comfortable space you see in lifelong acquaintances. In the 2011 version, we're told of a longtime relationship, and Donald Sutherland lends his considerable gravity to the scenes, but all the same, we don't get the depth of two people who know each other's lives, and way of life intimately. In the original, both Bishop and his mentor (and Bishop's father before him) have lived in the shadow of "the Organization" an affiliation which has clearly taken a toll on both of them. In the update "the Organization" has no more weight than any major company.


The difference in the presence of "the Organization" is huge considering the differences between the two films. In the original, the Organization is shadowy and immensely powerful. Their figurehead (Frank DeKova) is surrounded by foreboding, and has no trouble telling Bishop what he has to do, threatening him with ease and certainty. Bronson's Bishop has no chance to take down the Organization, they are quite simply too big for him to tackle. That oppression greatly informs his lifestyle and adds to his angst. In the remake, the Organization may as well be staffed by middle managers at any given corporation. When they cross Bishop, it's a very simple problem, he has to go after them and kill them first. There's little angst involved, and the outcome is never in doubt, Statham of course, will get his payback.

The relationship between Bishop and his new protege is also very different. In the original "Steve" (Jan Michael Vincent) is a truly distant and sadistic sort, who revels in almost letting his girlfriend bleed to death to impress Bishop. While he doesn't have nearly the depth of Bishop's character, they do share a certain coldness and a commitment to "making their own rules" The 2011 Steve (Ben Foster) is much less clearly defined, rather than cold, he's portrayed as unpredictable, sloppy, and daring. (qualities which Bishop shouldn't find impressive, but does)   Contrasted with the original Steve watching his girlfriend bleed to death, the remake Steve impresses Bishop by trying to kill a carjacker because (supposedly) a carjacker killed his father. Of course in both versions, Steve's father was Bishop's mentor figure who he killed, setting up possible vendettas. The original Steve, however, didn't seem emotionally bothered by his father's death at all, the lack of emotion part of what made Bishop interested in taking him under his wing. Ben Foster's Steve is just unlikeable, short tempered, and incompetent.

Of course one of the most famous parts of the 1972 Mechanic was it's ending, the dead Bishop leaving a note for Steve, letting him know that he saw his death coming and that he would be dead in a moment himself. This type of planning was Arthur Bishop all over. In the remake there's a note, but the set up seems a bit contrived. The note is also from a Bishop who just improbably escaped the clumsily attempted hit. The fact that Bishop is still alive takes most of the punch out of the note and the ending.


The original Mechanic was a hit man movie loaded with existential questions, deep characters, and unsolvable dilemmas. No one would expect a happy ending from it as the world presented, would never support it. It asked if anyone can really play by their own rules and an interesting answer. The remake gives us a solid action film, with no existential turmoil, only unlikeable and incompetent people.  Bishop's relative competence puts him one up on everyone and he dismantles his employer with little trouble at all, kills his faithless protege and lives happily ever after. For two movies with the same plot the differences are remarkable and a tremendously ponderous film loses all it's gravity to become just another action film. Any questions about "living by your own rules" are dismissed because we're reminded that you just can't kill the main character. The relationships all come across as forced.

That's not to say it's a "bad" movie. Simon West does make a good action flick, the explosions and assassinations and action sequences are impressive. The remake certainly comes across as a better looking product, as the original relied much more on story and character than budget. The actors are all solid enough. Statham is a likable enough action lead that you can enjoy watching, just don't expect philosophy or masterful tension. You could still have a good time watching it on it's own terms. Whether it's telling about the times, the studios, or the directors, is tough to say, but personally, I think you couldn't pick a worse movie to tack with a happy ending.

The remake was "OK" but Statham is no Bronson that's for sure! And I strongly disliked the ending of the remake. It felt like a total copout and a blatant opening for a sequel that will probably never happen.

I do like Ben Foster as an actor and was impressed with how thoroughly unlikable his character is but it almost takes you out of the film at times.

I was also surprised at how brutal the violence is in the film. Very visceral and bloody.

I dunno. It was a decent time waster, I suppose but it's the kind of film that I have no desire to watch again.

Totally agree. "OK" is exactly how I'd describe it, whereas the original Mechanic was a unique piece of work that I'll revisit many times. In my opinion they should've given it a new title as the comparison doesn't help it.

"qualities which Bishop shouldn't find impressive, but does"

That's true. They never really give Bishop a reason to show appreciation for unpredictable sloppy or daring.

Even his hoor is carefully used.

You've made me curious about the original. Will watch it soon

Thanks for stopping in! Yes, definitely watch the original. Seeing the professionalism of the original Bishop character will certainly add a new dimension to the story.

Jason Statham just pisses me off. I liked The Transporter fairly well. I didn't care much for The Bank Job but it wasn't horrible just too dark for my taste.

But Crank? And then Crank2?

Statham seems to be satisfied being a B movie action actor. This annoying when he could be more.

The Mechanic was just more of the same old crap from him. He never has any nuances in his characters.

Unlike a movie like the Professional, this movie was more of the same old pap without anything lively to spice it up.

It's a B movie. Yet another one. Not horrible but not really better than a dozen other films almost exactly like it.

Jason Statham is a walking disappointment.


The Mechanic was just more o

Agree with you Tirzah. I think he is capable of much more, but he seems comfortable with the action star roles. He's no Charles Bronson though, that's for sure and I don't think a remake of the classic Mechanic was a good call.

Bronson was often the same guy in most of his movies BUT he was always interesting. And there was just something about him that made him untrustworthy...you watched him because you expected him to do the unexpected.

Statham doesn't have that quality.

Bronson was quiet but there was always something boiling under the surface like snakes underwater. You never took your eye off of him.

This one has been lurking around my DVD queue, and just got delivered yesterday - I'll come back for your review after I watched it. :-)