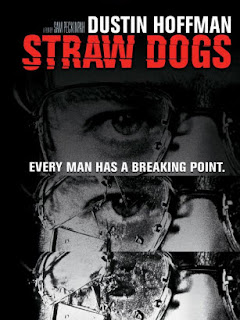 You can't really accuse Sam Peckinpah of being a soft touch. Straw Dogs is an ugly unpleasant movie, full of menace, hostility, and people without endearing qualities. Straw Dogs is a little different for him in that it takes his typical western brutality and applies it to a more "civilized" environment.

David Sumner(Dustin Hoffman) is an American mathematician, retreating to the English countryside with his wife Amy(Susan George) in order to finish a research project "in quiet" We are introduced to Amy via close up on her sweater, which she is obviously not wearing a bra underneath, carrying a "man trap" over her shoulder to bring home.

Charlie Venner, (Del Henney) an old boyfriend of Amy's is attracted by this sight and approaches immediately, along with his cousin Janice, and offers to help the Sumners with a construction project. It's obvious from the start that Charlie and his group of friends are very different than David.

Running into a bar for cigarettes, David witnesses an altercation between Charlie's uncle, Tom Hedden,and the bartender. David retreats to the background and lights a cigarette, smirking to himself as if watching children trying to do something they don't understand. Although Tom had paid for David's cigarettes to make up for the inconvenience he caused, David insists on paying again, as if Tom's money doesn't count. While David is in the bar, it's established that Charlie and Amy had a relationship, and Amy gets upset when Charlie claims that at one time she was "begging for it."

The men working on the house take liberties with the property, stealing a pair of Amy's panties and describing what they'd like to do with her. When asked by the men about his reasons for coming to England, they reference violence in the states, certainly including Vietnam protests, David says he's only seen shootings on television. He speaks to all of the locals as if he's their moral superior. This includes his wife, who he calls "an animal" when she's eager to have sex.

He gets impatient with her often, insisting that she leave him alone to work. She resents his chalkboard and calls him on it even messing up his equations. She also accuses him of moving them out there to avoid making a stand regarding the war. Amy mentions discomfort with how the men look at her, to which David only replies that she should wear a bra, saying "You shouldn't go around without one and not expect that type to stare." She does act sexually suggestive, standing topless in front of the bathroom window in full view of the workers on the roof and giving them a glimpse of her panties while getting out of the car.

The workers are always looking in the windows and often openly ridicule David. He chooses to ignore their hostility, even refusing to believe they are responsible when he finds their cat hung in the closet. Amy tells him they are proving that they can get into his bedroom, which again, he refuses to acknowledge. Finally when she won't relent, he agrees to broach the subject. He invites them into the house, and Amy brings out drinks including a bowl of milk for the cat. They don't take the bait and instead invite David to go hunting with them, which he eagerly agrees to perhaps to avoid a scene, or looking "unmanly."

He doesn't realize they have him out hunting so that Amy will be unattended at the house. Charlie finds her there and rapes her. She is initially repulsed, but clearly there is a lot of history between them and it becomes more complicated. However, Charlie didn't realize that another of his friends would want to participate as well which leaves her horrified with revulsion, and gives Charlie misgivings, although he does nothing about them. (And be advised, just as it sounds, the scene is very disturbing) Amy doesn't reveal these events to David, who later lectures her about being childish when he comes home after hunting. She tells him that they would have avoided unpleasantness if he'd confronted them about the cat right away. David responds that the bowl of milk made it impossible because he looked "like an idiot."  David makes a show of firing the crew the next day at first accusing them of wasting time, but when they argue, he says he just doesn't want them around.

Attending a church social event the next day, where the whole crew is present, Amy can't stop thinking of the rape and David seeing she's uncomfortable, but not knowing why, offers to take her home. While the social had been going on, a local pedophile, Henry Niles had been lured away by Janice, a local girl. She tried to seduce him not realizing how disturbed he was, and Tom kills her, then runs out into the road where David runs into him with the car. Amy, aware of Niles' past, says she doesn't want him in the house but David insists that they bring him home and call the doctor.

Meanwhile Charlie and his friends are out looking for Janice, having heard she left with Tom. They soon discover that he's at David's house and demand that he turn Tom over to them. David finally starts standing his ground. He locks them out but they won't back off, breaking his windows and pounding on the doors. The magistrate shows up and demands the attackers leave. They won't comply though, and when he's shot fighting over a gun, things escalate, as they realize they're all accomplices to murder now. They cut the phone line and start intensifying the attack.

Amy continues to panic and refuses to help David, demanding that he give up Niles. David will not back down however, and as the gravity of the situation sinks in David's civilized veneer starts to crack. He threatens to break Amy's neck when she tries to leave. David has become a completely different person, the look in his eyes enough evidence, that he's finally taking a stand. Although he imagined himself a man of ideals and education, it took a territorial threat to make this happen.Watching him scramble to hurt and kill his attackers outside it becomes obvious that his mild mannered veneer was not the result of any innate kindness but rather his sadism was held in check by cowardice, and once that was removed his ugliness is revealed. David grows frenzied with killing until the crisis is resolved. The value of his victory is questionable, as he has succeeded in defending a pedophile and murderer, by himself murdering everyone. At best, he has defended his territory. Leaving Amy alone at the house with the bodies, David drives Niles home. Niles says he doesn't know the way home and David responds "That's OK. Neither do I."

Right and wrong take a backseat to the question of who is more determined to get what they want and brutal enough to take it. David's stand is taken in order to save the life of a pedophile who just murdered a young girl. His attackers, although they have been hostile towards David, and extremely hostile against Amy, are ultimately trying to get justice for one of their own. But nothing is so simple, their past actions can't be removed because they currently want something more just. This world is not one of an easy morality, but rather people acting out their animalistic urges and hiding them underneath their social faces (some more than others) until something makes the social niceties irrelevant. No matter how polished the facade, the animal is still there and acting civilized, it would seem, is a weak defense against it.  Using a pedophile to incite David's stand is an inspired touch, and an interesting comment on David's denial of the power of sexual urges. It's also interesting that the rape of his wife, was not a factor in his loss of control, but rather another violation that happened independently.

Dustin Hoffman does a terrific job creating an unlikeable character. He takes David from a condescending, self consumed coward to an animalistic madman without straining believability at all. In David's mind, the world exists to serve him, his wife is his property, and others are tolerated only for their usefulness. He's so convinced of his superiority, that the idea of someone threatening him is difficult to even admit. But when things won't stay where he put them, his reference for his own behavior is lost. Straw Dogs is not a movie to like, but it's ugliness is portrayed convincingly, and acted very well. You might not feel the world is as nasty as Peckinpah does, (it's certainly relative I would think) but the holes pointed out in the civilized world are certainly worth some consideration.
Posted by INDBrent at 8:00 AM