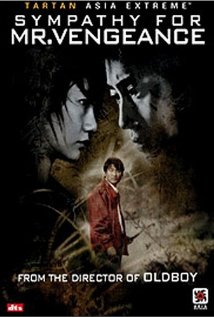 Despite the appearance of a revenge thriller, Sympathy for Mr. Vengeance is a story about helplessness. Ryu (Ha-Kyun Shin) a deaf, dumb and low income factory worker has a sister who desperately needs a kidney transplant. They care for each other very much, being each other's only family. She had taken factory work to support Ryu going to Art School, but once she got sick (possibly due to the work) he left school and took on the factory work himself in order to care for her.

He decides to donate his own kidney, but finds it's not compatible and has no way to secure another. He is also fired from his job to complicate things further. He turns to the black market, and finds an organization that demands his own kidney as well as 10 million won (all the money he has.) They take his money, remove the kidney on the spot and leave him naked in the middle of the city.  He is then told that the hospital has found a legitimate kidney, however the operation will cost 10 million won, which he no longer has.

Ryu spends most of his time with his girlfriend.Cha Young-mi (Doona Bae) an aggressive anarchist who is part of a secret revolutionary group.While temperamentally the opposite to Ryu's always calm nature, she communicates with Ryu almost effortlessly. They are very committed to each other and come across as nearly telepathic.

Distraught over the situation, Ryu takes Cha Young-mi's advice to kidnap his former boss, Park's (Kang-ho Song)daughter, Yossun, for ransom. They  assume that he has plenty of money and perhaps don't mind punishing him for firing Ryu. Cha Young-mi goes so far as to suggest that the kidnapping "won't even be a crime," that Yossun's family will be so happy to see her that they'll grow closer, and that the movement of the money helps their economy. She's very convincing. He agrees to do it, ready to do anything to help his sister. They begin spying on Yossun, trying to find the ideal situation to grab her.

Park meanwhile is confronted by another ex factory employee, who throws himself in front of Park's moving car. The man can't take the loss of his job and after pleading with Park to reconsider, the worker cuts himself in the street, while telling Park about the year's he devoted to the company. He is soon subdued by Park's bodyguards although very likely not surviving long afterwards.

They abduct Yossun and tell her that her Dad asked them to watch her. She stays with Ryu and his sister, who is now at home waiting to be admitted for surgery in five days. Ryu can't tell his sister about the kidnapping so has to coordinate the stories he told Yossun and his sister. They get along very well and they bond quickly, Yossun revealing details about her parent's divorce (Dad was too busy) and how she gets lots of toys but no attention. Much of the time Ryu's sister is also very sick and he takes care of her, but she spends a good amount of time playing with Yossun.

Park has received the ransom note, and Cha Young-mi follows him as he follows instructions for the drop off. The last part of the plan has Ryu tying up Park and putting a bag over his head so he can't follow them. Ryu's sister, meanwhile makes some phone calls and discovers that Ryu's story was a lie. Ryu returns home with the money, to find Yossun watching cartoons alone. She tells him that his sister is washing, but when he doesn't hear any activity for a long time, Ryu checks and finds his sister has cut her own wrists in the bathtub rather than go along with the kidnapping. This of course devastates him.

Park is still tied up after many hours, presumably forgotten. Ryu takes his sister's body to a riverside park to cover it in stones (he can't call the police, thanks to the kidnapping) He brings Yossun along but is distracted hiding his sister's body and leaves Yossun in the car. A mentally disturbed vagrant bothers Ryu and after being shooed off, wakes up Yossun trying to steal her necklace. She runs to find Ryu, but falls into the lake and screams for help right behind him, although he can't hear a thing, being deaf. He sees her floating by in the water but it's already too late. He pulls the body from the water but leaves it to be found.

Park has gotten free and is soon informed about his daughter. When the police ask him if he's provoked anyone, he answers "I thought I'd lived an honest life." The policeman takes a call and reveals that his kid needs an operation which costs 10 million won. Park soon becomes consumed with finding his daughter's killer. He starts seeing vision's of Yossun, and she asks him why he never got her swimming lessons. Park sells his company and house and devotes all his time to getting revenge. He meets with the police detective who helps him investigate. It occurs to Park that it could be an ex employee so they start looking in that direction finding many of his ex workers living in horrible conditions. The detective brings Park to check on his son who is in the hospital and with very little hope, according to the doctor.

Ryu and Cha Young-mi are trying to keep a low profile, Ryu now staying at her place. Park is examining Ryu and his sister's now abandoned place, when he hears a radio show dedication from Ryu to his sister from the radio the tenants next door are playing. The DJ says that Ryu is deaf, which jogs Parks memory. She remembers that he had sent a postcard months ago, saying his sister needed an operation, and she reads a new postcard over the air, in which Ryu claims that he killed her. They then read the address of the radio station. The DJ wants to send him a refrigerator as part of their program and asks the audience to let her know if they can get an address as he didn't provide one. Park visits the radio station and finds the postcards are detailed pictures Ryu painted of the riverside and the accident, including Yossun in the water. He visits the scene again and while skipping stones uncovers Ryu's sister's body. He also encounters the vagrant who is wearing Yossun's necklace and brings him to the police. Questioning him, they get information about the car Ryu was driving and check it out.

Cha Young-mi meets with the organ dealers, which turns out to be a family business, in order to supposedly get a kidney, but really helping Ryu find them, so that he can pay them back for ruining his sister's chance at the operation. Ryu locates them and starts taking revenge killing the sons in front of their junkie mother, who has a scalpel hidden in her palm.

Park has now located Chan Youg-mi. He ties her in a chair and starts torturing her, using violence and shock treatments to get information fron her. She remains defiant, but tells him that killing Yossun was an accident. She also warns him that she's part of a terrorist group whichshe has given Park's picture, so if anything happens to her, "they'll kill him, 100%" and that if he wants to live he should leave. Park doesn't listen, of course and shocks her to death.The police investigating her death, assume that she was the only member of the terrorist organization.

Ryu is bleeding, having been cut by the mother before killing her. He finds out that Cha Young-mi is dead and ends up in an elevator with the police and her corpse, trying to hide his bleeding. He manages to hold her hand for a moment before getting off, now having a reason for seeking revenge against Park. The police reveal to Park that not only did Ryu kill the organ dealers, but he took all of their kidneys. They urge him to stop looking for Ryu, convinced that he's far more dangerous than they thought.

Park doesn't listen and sneaks up on Ryu, knocking him out, tying him up and bringing him to the river. He unties Ryu when they are both in the water and explains that he knows he's a good guy, but has to kill him regardless. He clearly he takes no joy in it. Of course things don't end quite so simply as there are other consequences waiting to occur, but everything does get resolved.


Be advised that this movie while not extremely gory by horror movie standards, has its fair share of visceral and graphic bloody injury. Even without that, it succeeds at disturbing. Someone getting shocked with a blanket over them, is in my opinion more unsettling than seeing the action. For a revenge movie, it does an interesting job of making all the major players sympathetic. Park and Ryu are not horrible men who deserve to be killed, but the victims of tragedies that all their best intentions can't resolve. Everything that they do. they do for the sake of their family, both knowing that nothing will make things right. The acting is solid throughout, which is vital in a movie, where our lead character shists halfway through and we're asked to not onlt identify with the new lead, but retain sympathy for the original one. Ha-Kyun Shin does an outstanding job portraying a deaf and dumb character, who is not limited by his lack of hearing (other than at one key point) and maintains our interest with only the way he presents himself physically. Kang-ho Song's Park is also played perfectly despite a challenging character. Although oblivious to the world around him, even when his own actions create sufferring, we nevertheless come to understand that he is not malicious, only ignorant and soon too absorbed in his own hurt to change. Doona Bae plays a great counterpoint to the two more serious characters. While not completely unserious, her character's radical nature, and her ability to embrace lunacy, provides a few needed laughs.

Chan-wook Park uses interesting effects, such as cutting out the sound occasionally to give us Ryu's experience and flashing between two similar conversations that both end the same place. He omits certain details, forcing us to make assumptions based on our knowledge of the characters (and doesn't stray from their logic either) Overall it's shot beautifully and has a sense of fluidity that presents these lives as sad and inevitably ruined by circumstances they didn't create or intend. It's definitely not a movie to encourage revenge seekers, as it's completely unglamorous, nobody ends up well, and the best they can hope for is to be glad that it's over.  While the story is about as far from happy as it gets, it's nonetheless touching in it's own way to see the lengths that they will go to maintain what they love even when the object is gone. These are not caricatures, but people that are seriously broken, by their own depth of feeling, leaving us with not a celebration of violence, but a mournful look at the mess it makes.
Posted by INDBrent at 7:30 AM