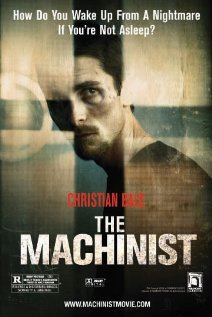 Trevor Reznick (Christian Bale) hasn't slept "in a year" and that clearly isn't working well for him. He is so thin that he looks like he's dying and many people tell him, "If you were any thinner, you wouldn't exist." The effect is unsettling, particularly if you've seen Christian Bale in other movies with a normal build. His bones are clearly visible beneath his skin, which he flaunts with his movements clearly making a point of showing this.

The movie begins with him badly cut and bruised in addition to his weight problem. We see him rolling up a body in a carpet and rolling it into some water. He's found by someone who asks who he is.From there, we flash back and see him in his daily routine. He works as a lathe operator in a machine shop, where his coworkers give him a hard time for not socializing and his boss wants him to take a drug test, because he's looking so unhealthy.

He spends some of his off time with a hooker named Stevie (Jennifer Jason Leigh) who keeps him company, making love, talking and  giving him a hard time about his weight. They clearly have a long running arrangement and are very comfortable with each other. He also talks regularly with a diner waitress named Marie (Aitana Sanchez -Gijon) who has him try different pies every night. Marie thinks that he's lonely and asks him why he goes out of his way to visit her diner (it's at the airport) He tells her that if he went to Denny's he couldn't skip town if he suddenly decided to.

Trevor also finds strange post it notes in his apartment. The first reading, "Who are you?" and later a hangman game with most of the letters blank.

One day sitting outside in his car and trying to sleep he meets a guy named Ivan who claims he's on the same shift. Trevor doesn't recognize him but Ivan says he's covering for someone. Soon after Trevor sees him in the machine shop , where Ivan makes a threatening gesture with a finger across his throat. Distracted, Trevor turns on a machine while another man has his arm stuck in it. It takes off the man's hand and when questioned about it, Trevor mentions seeing Ivan. This raises alarms as there is no Ivan working there. He sees Ivan in his car and follows him to a bar to have a drink. He discusses a co-worker who was up on charges but just returned to work. When Ivan goes to the restroom, Trevor finds a picture of Ivan and that coworker in Ivan's wallet on the bar.

Marie takes Trevor out to an amusement park with her son on Mother's day. When she has to take a private call, he takes Nicholas out for a walk, visiting a haunted house type ride called "Route 666"  Finding the ride more disturbing and surreal than expected, (including a realistic depiction of a woman mourning at a funeral) he tells Nicholas to close his eyes. Trevor starts having hallucinations and Nicholas has a seizure.

Marie finds him calling frantically for help and she informs him that Nicholas is epileptic and it wasn't his fault. She asks him inside for a drink and asks him about the large tips, he leaves her, telling him to take her to the movies, rather than over tipping. He offers to refill her wine glass, and finding her kitchen sees a note on her fridge that resembles his handwriting, he flashes to his own place where he digs out the hangman post it filling in all the letters (ER at the end was provided) to spell MOTHER.

Back at work he runs into Miller, and apologizes for his part in the accident. Miller seems fine with the settlement check he's leaving with and tells Trevor to forget it. However, as soon as he gets back to work a machine starts up while his hand is stuck in it, and he barely gets it out in time. Trevor gets paranoid, accusing everyone of setting him up. Out of control, his boss fires him. He goes to see Stevie and finds her with a black eye. They make love and talk both discussing her quitting hooking and the two of them having a relationship. He soon gets another post it with more letters filled in, giving him _IL_ER. He assumes now that it spells MILLER, and goes to confront Miller about it, losing his temper until Miller punches him in the gut and kicks him off his property. He sees Ivan on the street waiting for him and chases him down until his car breaks down. He does manage to get the plate number from the car, although the DMV won't look it up. The DMV worker tells him that the police might help if a crime had been committed. Trevor then steps in front of a car to look like he's been run over and heads to the police department. They tell him that the car is his own, and he reported it was totalled in a wreck one year ago.

Trevor runs when the police want to ask questions. He goes to Stevie's where she cleans him up and tries to talk him into going to the hospital. They discuss settling down together and he notices Stevie has the picture of Ivan fishing framed and loses his temper, assuming that Ivan is her ex. She doesn't understand what he's taking about as she sees him in the picture, not Ivan. She kicks him out of her house when he won't calm down. He runs to the airport diner, and is surprised when the waitress tells him that there is no Marie that works there, although the current waitress sees him coming in every night.

He drives around looking for Ivan, and finally sees him getting out of the car with Marie's son Nicholas. He rushes in after Ivan, who informs him that they both know Nicholas is dead, also claiming that Trevor has been leaving notes for himself. He slits Ivan's throat and then looking at the fishing picture, sees himself instead of Ivan. He rolls up Ivan's body in carpet and dumping it in the water, we return to the opening scene, where it turns out Ivan is the one confronting him.

Trevor finally remembers who he is, and that one year ago he ran over Nicholas accidentally. The hangman puzzle spells out KILLER, referring to himself. Ivan now rides along with him in his truck and waves goodbye as enters the station to turn himself in. Once shown to a cell after reporting what he did, he falls asleep for the first time in a year.

The Machinist works beautifully as a study on the power of denial, and the torture of a nagging conscience. By portraying Trevor's tortures so visually, the symptoms work perfectly for film. Christian Bale's shocking weight loss furthers the sense of agony that Trevor experiences. The subdued color choices and dark machine shop environment suggest all along that everything is not as it appears. This portrayal of severe insomnia would have worked equally well as a dream or an afterlife. The skipping from place to place without sleep involved also suggests that his mind is not functioning in a literal way, which is confirmed towards the end of the film. His world is as fictitious as it is real and despite not sleeping, his hallucinations are their own sort of dream, which allows him escape, but drains him continually.

All in all, it's a very solid movie that's as much a horror film as it is a thriller. When the pieces start clicking together, they do so not with as much discovery as relief, that he'll find out why he hasn't slept for a year and that he can finally confront what he's been avoiding, as prison seems a lighter sentence than the way he's living.
Posted by INDBrent at 10:31 AM

I haven't seen this, but the movie that came to mind is Insomnia-with Al Pacino and Robin Williams. They did something I think with the lense filter to give it kind of painful feel as Pacino goes days without sleep. Will have to see this one now, you make it sound like a twisted mosiac.

Yes. i love Insomnia. I'll probably do that one before long. It's another movie directed by Christopher Nolan (Inception, Memento, Following) There are similarities in feeling, but this one is much more nightmarish. They both share the sense of longing visually for sleep! I would say a twisted mosaic is an apt description!

There has long been an argument that film noir is defined as a movie made during a certain era in Hollywood (early '40s to early '50s), but I'm partial to the notion that the expressionist style and fatalistic themes of noir can be embraced and applied by filmmakers around the world to this day. In many ways I've always seen The Machinist as a film noir, and you're essay goes a long way to proving my theories. As usual, well done Brent.

Now there's an obervation that goes right to the heart of my thoughts on this blog! Film noir contributed a lot more to our mentality than the lighting effects! The attitudes, the doomed, hard luck hero, even the snappy patter!
If you asked me about this film and I told you "It's very "film noir" you would already have a lot of information about the characters and the film's "outlook" I'll wager you wouldn't even assume it was shot in black and white, just because "film noir" is more attached to the whole story perspective than the technical details of filming! Thanks Jeff! That made my day!

This is another outstanding movie that explores themes of guilt & denial in the extreme - I alternated between the edge of my seat and murmuring WTF to myself the entire movie.

Yes, it doesn't spare on the unnerving aspects!I love the part where he flips out over the picture of "Ivan" that Stevie has on her nightstand. You start to realize how far around the bend he is. The odd thing is that as horric as his offense was, you almost feel a relief when he remembers, hoping the "fog" will lift!

Great post Brent! I agree with Jeff's film noir position. I enjoyed your analysis of the film and as a long standing "cult film" (the pre-indi film classification) I will add this to my list of films to view. I love layered films that ride on metaphore and make you think.

Hi Ron, Thanks for stopping in and glad you enjoyed the read! Definitely layered and metaphorical! Stop in and add your take after you watch it, I'd be curious to hear your thoughts!

Thanks for reminding me of a truly great movie! Your articles always make want to see a movie, or see it again.

Delighted to hear that Rachel! That's always the goal. Thanks for stopping in!