Today we have a guest post by Peyton Farquhar of Prattle On, Boyo. Point Blank is a classic and one of my long time favorites, so I was thrilled when Peyton offered his own write-up. I hope you enjoy it as much as I did.


by Peyton Farquhar from Prattle On, Boyo

Based on the novel, The Hunter, written by Richard Stark, Point Blank is a neo-noir flick filmed in 1967 in and around Alcatraz Island, and Los Angeles. It was directed by John Boorman, who is also known for Deliverance and Excalibur.

Lee Marvin (1924 – 1987) plays the lead named simply, “Walker,” which also functions as an apt description of the character, as well. In addition to being known as a film actor whose roles tended to be hard-boiled, Marvin was also a Scout Sniper (Surveillance and Target Acquisition) in the United States Marine Corps during World War II. If you're a law nerd, then it may also interest you to know that Lee Marvin's personal dirty laundry also functioned as the famous starting point for spousal support, which is better known as a Marvin action in contemporary Family Law Court in the State of California.

12. Walker is a loyal friend you can count on to help take out and then hide the bodies afterward.

In the opening segment of the film, Walker and his best bud, Reese (played by John Vernon) are at a crowded event surrounded by drunken party goers in three-piece suits. Reese stumbles towards Walker, knocking him to the ground and pleads with him that he needs his help and will be killed if he doesn't get it. In the next shot, Reese explains that this, meaning Alcatraz, is where “they” make the money drop. All they have to do is just wait and then knock “them” over the head. Walker, dependable friend that he is, agrees.

Betrayed, shot up and bleeding profusely, he manages to swim the 1.5 miles back to civilization in fifty degree water temperatures and dangerous riptides surrounding The Rock. It is because of these same riptides that the island was chosen to be a maximum security penitentiary for Civil War prisoners in 1861, and then later, for civilian prisoners incarcerated by the U.S. Department of Justice in 1933.

He doesn't punch out the bald headed nutjob on the ferry touring Alcatraz Island with him even though he begins speaking to him from seemingly out of nowhere going on about how Reese took off with his wife, Lynne, and, has hit the big time with the money he screwed Walker out of.

9. Walker doesn't write anything down because he's too cool to forget.

When Yost, the annoying freak on the ferry, shows him the address of where his wife is shacked up with his former best friend Reese and the missing money, he doesn't bother to take notes. He just memorizes the address and does what he has to do.

When Big John, the cooz hound used car salesman, tells him that he doesn't need to buckle up, Walker reminds him that most accidents happen within three miles from home.

When he asks Big John where he can find Reese, and, Big John won't tell him, Walker doesn't throttle the guy despite the fact that desperately deserves it. Instead, he takes him for a ride in one of his used vehicles.

When he finally determines where Reese is, he persuades a gay couple in Reese's building to create a diversion so he can get past Reese's goons by telling the couple to contact the cops and report that they are being held hostage. The cops show up and the sirens and general bedlam cause the thugs not to notice when Walker effortlessly slips past them.

5. Walker knows that all women secretly want him.

After Walker has already bagged his sister-in-law, Chris, (Angie Dickinson), and, convinces her to distract Reese, he rides up in the elevator to the Penthouse level where Reese is and encounters Reese's secretary. He then casually reaches down between her legs to press the button that opens Reese's electronically fortified front door. The secretary doesn't even flinch.

Betrayed by his best friend, Reese, Walker still doesn't exact retribution upon Reese when he finds him naked and sniveling for his life. Instead, Walker gives Reese a choice and the coward hurls himself over his patio from the Penthouse level. 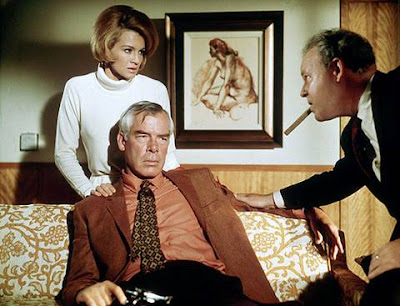 Walker eventually finds the brains of the Organization. When Brewster (Carroll O'Connor) balks after he asks him for his $93k, Walker sits back on the couch and takes a break instead of beating the living shit out of Archie Bunker.

Following some heated discussion, Chris powers on all of the electrical appliances in Brewster's house. When he finds her sipping on some booze next to the pool table, he is about to walk away when she cracks him on the noggin with a pool cue, and, then proceeds to furiously bitch slap him. Instead of fighting back, Walker allows her to carry out her tantrum, and then switches on the television where he nonchalantly retires to the sofa to watch a cold cream commercial.

While taking mighty footsteps of payback through the hallways at LAX airport, Walker reminisces about his wife, Lynne. He imagines what the bitch has been doing without him since she and Reese fired at him from point blank range, took his money and then left him for dead on Alcatraz.

When he bursts through the front door of their home, he grabs her and puts his hand over her mouth so that she can't scream to warn Reese of his presence. He throws her to the floor and then kicks open the bedroom door, and, instead of finding Reese, empties his .38 into vacant sheets. Walker then hears out Lynne as to why she left him for Reese.

©2010 Peyton Farquhar™ and Prattle On, Boyo™. Unauthorized use and/or duplication of this material without express and written permission from this blog’s author and/or owner is strictly prohibited. Excerpts and links may be used, provided that full and clear credit is given to Peyton Farquhar™ and Prattle On, Boyo™ with appropriate and specific direction to the original content.
Posted by INDBrent at 7:05 AM

As I mentioned, Point Blank has always been one of my favorites. Lee Marvin is like a force of nature here. Even though he's put through the wringer, you almost pity the people in his way as they don't have a chance. The recent "remake" (Payback starring Mel Gibson) doesn't hold a candle to this movie.

This is a great film and one of a long list of movies that Marvin kicks ass in!

Yes, agreed. I don't know if Lee Marvin knows how to not kick ass.

Any friend who is loyal enough to help me hide the bodies is a friend for me.

Excellent guest poster, now I see you have good taste in movies and friendly writers!

Thanks! I first found Peyton's blog when he reviewed a movie that most would not watch on a dare. And frankly, if you're someone who's excited enough about "Point Blank" to write about it, you must be alright!
I also have good taste in blogs (and bloggers) I associate with!

It sounds a little extreme, but I think that is a good gauge of friendship (not that I've ever literally tried it) but if you have any doubt that your friend would help you dispose of the evidence, then the friendship isn't as solid as you think!

If you can see a man sing in a musical western and still think he's a tough he-man then he must be cool.

And that's all I have to say about Lee Marvin.

No doubt about it - they don't make 'em like Lee Marvin anymore. Compared to the Marv, John Wayne is an overly butch drag queen.

I first saw this flick back in college for a film class. I got a lot out of the movies on the syllabus mostly because the prof wasn't like a prof at all, but just some dude talking about his favorite movies.

I can't really remember how I wrote the original paper for the movie, but thought I'd try something different this time. Something that puts the Walker character into perspective for anyone who wants to see the movie.

LOL. Lee Marvin's mother wouldn't have dared to name him Marion, that's for sure.
Sounds like a great class. It can be an amazing thing when professors really love their subject.
I love the approach, the focus on Walker's (and Lee Marvin himelf) prowess at being kick ass is perfect prepartion to see this one. One of these days, I'll probably do the Lee Marvin version of "The Killers" but not soon as too much Marvin might scare the other reviews away!

I love reason number 9!!! now if only that applied to me....damn. I'd forget my name if I wasn't wearing this name tag.

Lee Marvin has been great in so many roles and this just one of many. Thanks, Peyton, for a really fun review.

By the way, my word verification word is meatox which seems rather fitting.