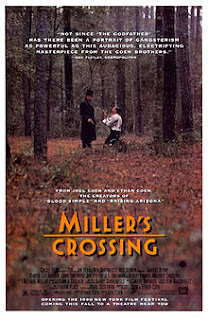 In Miller's Crossing the Coen's created a world suited entirely to Tom Reagan(Gabriel Byrne). Sometimes grim and gritty, other times like a comic book in its over the top, prohibition era gangster imagery. They succeed in creating the 1930's that would have been  if Dick Tracy and Jimmy Cagney collaborated to make the world.

Tom is clearly a loner by nature, quicker with a wisecrack and smarter than anyone he knows. He's also deeply pessimistic, and mean spirited, but highly principled. Tom doesn't want to run things though, he's happy playing number two to his close friend Leo (Albert Finney) the Irish crime boss who runs the town. Running things wouldn't be a privelege to Tom, only pointless work. Tom and Leo start off as close as brothers, Tom being the only person Leo listens to, but they both have a blind spot when it comes to Verna (Marcia Gay Harden), Leo's girlfriend who Tom is also sleeping with.

The problems start when Verna's brother Bernie (John Turturro) anger's the local Italian gangster Johnny Caspar (Jon Polito). Bernie's costing Caspar money and Caspar wants him dead. Leo won't allow it because he promised Verna he'd protect her brother. Tom can't talk Leo into budging although he tries, thinking that Bernie's not worth a gang war. With neither side budging, a gang war is clearly on the way, the perfect time for Tom and Leo to have a falling out. Tom switches sides and is forced to kill Bernie to prove his loyalty. Tom manages to spare Bernie, while convincing Caspar that he killed him.

Byrne's Tom is an instant classic, he has serious drinking and gambling problems, which have his creditors chasing him throughout the film. It's telling of the character that when they catch up to him and explain that the beating he's about to get is policy, Tom just takes it and says, "Tell Lazarre, No hard feelings"  and the thug replies "Jesus Tom, he knows." Tom always pays what he owes (whether it's the money or taking the beating). Leo has even freely offerred to clear his debts, but Tom insists that he pays his own way.

It's clear that Tom always has a plan, what we don't know for sure is how far he's in over his head. His advantage is that no matter how deep he's sunk, Tom doesn't lose his head. He's got principles but all the same he's naturally sharp and can't help cutting people down to size with his remarks. But smart as he is, he can't control everything, he has to do a lot of adjustments on the fly, particularly when his good deed of sparing Bernie comes back to bite him, when Bernie realizes that being alive gives him leverage over Tom.

The dialogue, and the stereotypes are as over the top as the scenery. Everybody's larger and smaller than life, except for Tom. Tom's the realistic contrast with his environment, as if he's the only photograph in a comic book. That doesn't take away from other performances. Leo in particular is amazing in a scene where he's attacked in his house by a ridiculous number of bullets and charges forward guns blazing while in his bedclothes, untouched like a force of nature. Verna's a great bad girl and Tom's kindred spirit. For all their sparring they can't keep from being attracted to each other, despite the fact that they both care deeply for Leo. Whether they love or hate each other is not really a choice, as both emotions are mixed too thoroughly to be seperated. Turturro is tremendous as Bernie a sleazy opportunist with no principles at all, beyond the quickest buck he can make. His character becomes less likable every minute he's on screen.

Tom's what it's all about though. He's too smart to be likeable as many people point out in the movie. It's tough to like a guy that won't owe you anything. Tom is too smart for the world he's in, so the world has to throw everything it can manage in his way, and the over the top nature of the world makes the violence and pressure he endures that much more intense by contrast. Watching the results of his doublecrosses, we worry less for Tom than wonder where his true loyalties lie and how they'll pay off. He's a great distillation of all the hard-bitten smart-asses in gangster movie/film noir history, but thanks to Byrne's performance, the character doesn't feel borrowed. Here, the Coen Brothers craft a fine love letter to the old crime genres and create a great character to fit into that tradition.
Posted by INDBrent at 10:23 PM

Good choice. I love love love this movie. Smart and dark and fast. Have loved the Coen brothers since Blood Simple, everything they do is worth watching.

Thanks for reading! Agreed on the Coens. What amazes me about them is the remarkable differences between every on of their movies. It's like they make a new rule book every time, yet it still feels like the Coen brothers.

Now, this is one of your reviews that I CAN read from start to finish, having seen this film several times now. I am always amazed that it was not more of a success that it was when it first came out, though it appears to have become something of a cult classic (not unusual for Gabriel Byrne films for some reason.)

It's the dialogue that I love. Apparently the Coen brothers would accept no deviation whatsoever, not a tiny little bit, from the printed script. And the humour! Byrne tells how when he first read the script, he thought it was a comedy ...

Oh yeah, the dialogue is obviously painstakingly crafted. One fan of this movie left several quotes on my facebook entry! "What's the rumpus?" and Turturro offering to "squirt a few" I'm sure an entry could be done on just the dialogue. I liked Jon Polito's "Don't smart me." And Byrne of course is the standout here. His tongue is so quick with the barbs. I like Verna's line to Tom, "I've never met anyone who made being a son of a bitch such a point of pride." Lots of laughs here, it's fun smart and intense. This one was criminally underrated.