Man on the Train 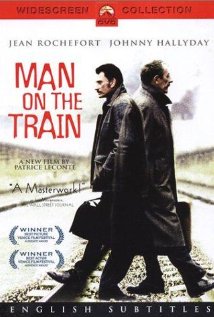 Milan(Johnny Hallyday) is the Man on the Train, and we open with him suffering a headache on a train ride and finding he's out of aspirin. In the first ten seconds we know from his weathered and rough appearance as well as the music building in the background that this guy is possibly dangerous, composed and also very tired. Something in his eyes makes him seem like a barely caged tiger.

The train drops him off in a small town and at the drug store he runs into Manesquier (Jean Rochefort) a retired poetry teacher who is as mild as Milan is bold. Manesquier offers Milan a glass of water on discovering that the aspirin he bought is soluble. He is clearly fascinated with Milan, who surprises Manesquier by complimenting his house, which is full of family belongings, that Manesquier himself downplays as useless and boring.

He asks Milan why he likes the house, and Milan replies, "It's full of the past somehow." That's also an apt description for these characters, both of them carry all of their past with them, seemingly unable to change who they are. As they each head toward their own inevitable moments, (a bank heist and an operation, both the coming Saturday morning) they examine each other as if they've been given an opportunity to take another road. Since the small town hotel is closed, Milan stays with Manesquier in an extra room and they form an instant if unlikely friendship. A bond quickly forms between them, as Manesquier can't stop talking and Milan says little at all. Each is so different from the other that they can't help exploring through conversation and small experience, the life they always wondered about that the other represents.

This is not a role reversal film, each character knows who he is (perhaps too well) but all the same Manesquier can't help but play with Milan's guns when he is out of the house, even draws the pistols while watching himself in the mirror talking like Wyatt Earp. Milan tries on slippers for the first time, and also smokes a pipe in a robe, while filling in as teacher for a private poetry lesson that Manesquier forgot about.  Each brings out something else in the other, and you get the sense that even though they will part on Saturday, this could be the most important meeting of their lives. Maybe they can change or at least not be completely trapped, by the identities they've built.

Manesquier says of himself at one point, when talking of his will to his sister, that one day they just "struck a pose and turned into mummies" They fit so completely into their roles that they didn't have to live anymore. And that's we're watching, people who became the characters they were playing, finally realizing what they've done. The story is not complicated but it's captivating to watch it happen. In one scene Milan is teaching Manesquier to shoot a pistol and Manesquier, missing badly asks what it takes to shoot well. Not talent, or even practice, Milan tells him, "Nobody knows. Maybe a lack of pity." It's clear that Milan could have had this quality, but he's aging, and for one who repeats that he doesn't ask questions, he begins asking quite a few. Notably, in the same scene, he asks Manesquier about a poem he knows two lines of, which Manesquier fills in "On the Pont Neuf I met/No dog, no stick, no sign/Pity for those in despair/ That the crowd turns aside from." (There's more to it, but that's enough to get the idea started)

The scenes are slow and graceful, dark and muted. The blue tones that begin in the opening carry through and the beautiful melancholy persists to the end. The music at times acts as another character, particularly given Manesquier's love/hate relationship with playing Schumann (he identifies with his "love of failure.")
Thoughtful and full of conversational and visual poetry, it is to me a celebration of the idea that no matter how far we're set down a certain road there could still be time to be more than we thought we were. Patrice Leconte's film manages to capture the best in these two characters, making each of them much more than they ever thought they could be. Maybe if it's too late to change, you can lose gracefully. That should count for something. Man on the Train is a heartfelt meditation on the lives we choose. 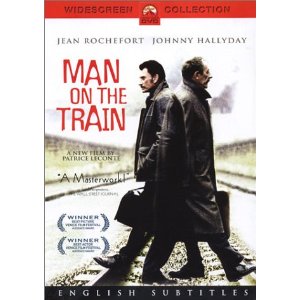 It's not so much a movie about things or action but it's a movie of two people, like the difference between a fascinating character sketch and an action film. I haven't seen this one in a very long time and I only saw it once.

It is a very quiet movie, and 90% of it is the two characters talking. Very much a character sketch. I love the mood of it, a lot is happening but it's all happening in their heads. I watch it pretty often and it affects me every time. The performances are brilliant.

This is one of those reviews where I only read the first three or four paragraphs. By that time I am so sold on the film you describe that I want to go out and get a copy, and I don't finish reading for fear of spoiling the plot! But I just wanted to say how much I appreciate this review.

Hi Lozzie, Terrific! I am glad to hear that as my main goal here is to do just that. Although I want to tell you everything that happens in the review, there are many points I leave vague so as not to ruin the experience. But, in this case, even if I did tell you everything, watching these two actors in their parts would still dazzle you. But yes, watch it and please let me know your thoughts when you have! Thanks for reading!

Hi Brent, please could you do a review on Sherlock Holmes, because that is the only film that I have seen in the last two years.
Thanks, Annie

I'd be happy to review Sherlock Holmes! The only film in two years though? What was it that pulled you in to see it?

I'll do a proper review fairly soon as I have a couple other requests to get through, but I'll tell you in the meantime that I thought it was really good.

I'll be sure to click on some of the google ads here. So you can keep up the great work.. Number 11 blog on facebook today!!

Thanks Woody, hope you enjoy it.

I remember feeling the sadness of this beautiful film but not the specifics. I suppose melancholy is a better word. I am looking forward to seeing it again. I know I'd like to write about it.

I can't wait to read your thoughts on it. I think the word melancholy suits it pretty well. WHat's the difference between sadness and melancholy though?

I will have to check this movie out. My other half and I are big movie buffs, so I'll stick this on our ''to watch'' list! It's honestly not that long, as we get through movies like no body's buisness :)

Hi Mesina, Thanks for checking it out! You won't regret it. I've always watched a lot of films but since Netflix started the instant streaming, my list has gotten out of control.

Watched it last night after reading & liking this review.
A study of the lives of two men who stumble upon each other. I particularly liked the smooth narrative, unpretentious dialogues with no crowding or melodrama. Throughtout the movie, there is a lingering silence depicted by the lonely streets and as you say a quiet visual poetry fills in.

I particularly liked the poignant scene between brother and sister, the only emotional discussion about their childhood and their present.

A very subtle film with natural performances by the two characters and a lingering sadness which somehow makes you conclude the ending.

Liked it. Thanks for sharing the review.

Fantastic! Nothing makes me feel better than someone enjoying I recommend that they otherwise wouldn't have found. This is also a movie that stays with you afterwards.

Thanks for reading and thanks for updating me after watching. Very exciting!