This Gun For Hire 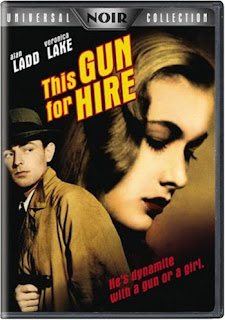 This Gun for Hire was based on a story by Graham Greene and was also the breakout role for ALan Ladd. Ladd's Raven is the big reason to watch this movie. From nearly the start, it's clear that we are not dealing with the popular Hollywood hit man who only kills bad people. Raven has no problem at all shooting an innocent woman for being in the wrong place at the wrong time. The character clearly is not comfortable with and/or unable to deal with the intricacies of social interaction. Ladd's cold portrayal of the killer is simply fantastic. He seems to think nothing more of killing than of brushing his teeth.

He is not totally emotionless however, having a soft spot for cats, and at a pivotal scene in the character's development, he considers killing a crippled girl who could be a loose end later. Although he opts not to, there is no question that he was capable of going the other way.


He does have emotions, they're just a long way down the moral scale. As you might expect, because we do need some conflict, Raven is doublecrossed by his employer,Gates (Laird Cregar) who pays him in counterfeit bills so he'll be picked up by the cops and out of the picture. Gates is the middleman and clearly a coward. He also owns a nightclub, which is how Veronica Lake's character Ellen becomes mixed up in the mess.

Raven learns of the doublecross just before the cops close in and of course heads out to get his revenge. On the train out of town, he runs into Ellen, a special agent on an undercover assignment to work at Gate's nightclub looking for information on the anti-american organization Gates works for. While Lake certainly carries the role competently, there isn't much to the role. She develops some sympathy for Raven, ending up as his willing hostage, she digs into his psyche and learn something about why he's not a people person.

Ellen's boyfriend Michael Crane (Robert Preston)is, coincidentally, a police detective who's out looking for Raven. He and Ellen were about to get married, when Ellen's secret nightclub assignment came up. Of course, it is so top secret she can't even tell Michael about it.

The plot revolves around a secret formula which Raven procured from his victims in the beginning and handed over to Gates. While convoluted, it's fast paced enough to keep your attention. In short, Ellen needs to get the formula from the communists to help the USA, Raven needs revenge, and Michael needs to get Raven. It all comes through in the end. If you don't worry about plot devices and just watch Raven's journey to the end of the picture, you'll find it a very worthwhile experience.
Posted by INDBrent at 5:28 PM

I want to go and watch this and THEN come back, hopefully with something half-way intelligent to say.

I can relate. You can watch this one entirely on Youtube. It's something to see particulary if you remember Alan Ladd from "Shane"

You should remember that the ultimate Bitcoin exchange company is YoBit.