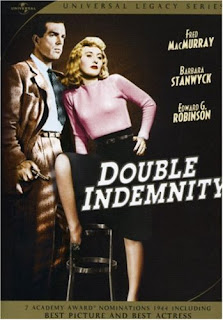 Double Indemnity, with good reason, is often used as a perfect example of film noir. While it certainly succeeds there, this classification marginalizes the fact that it is simply a great film. Billy Wilder creates a bleak landscape where tenderness exists only to ensure the tragedy of its reach falling short.

Fred MacMurray is an inspired choice as Walter Neff. A competent insurance salesman who is used to being the smartest man in the room, a quality which he uses on charm and creating likeability, rather than proving his own worth to anyone else. It is Neff's knowledge of his own competence that dooms him. Neff is capable of anything, provided he has the motivation. That's where Phyliss Dietrichson (Barbara Stanwyck) comes in. The innuendo laced patter between the two of them when first getting acquainted is worth the price of admission. The dialogue is great, (Thanks to Raymond Chandler) but it's the delivery that makes it perfect:

Phyllis: Mr. Neff, why don't you drop by tomorrow evening about eight-thirty. He'll be in then.
Walter Neff: Who?
Phyllis: My husband. You were anxious to talk to him weren't you?
Walter Neff: Yeah, I was, but I'm sort of getting over the idea, if you know what I mean.
Phyllis: There's a speed limit in this state, Mr. Neff. Forty-five miles an hour.
Walter Neff: How fast was I going, officer?
Phyllis: I'd say around ninety.


Neither of them bats an eye in this exchange.It becomes clear very quickly that they are both master manipulators playing off each other. Once lust comes into play, Neff is at a disadvantage. By regarding women as emotionally handicapped creatures, he underestimates the calculation that is second nature to Phyliss. I think it's the challenge that engages Neff, the idea that he can accomplish this impossible task (first the conquest of Phyliss, later getting away with Mr. Dietrich's murder.) that most men wouldn't even consider. His desire for Phyliss while certainly real physically, is mostly a device, he uses to sell himself the illegal and immoral elements of the action.

It's no accident that Neff is a salesman (and a good one.) He is well versed in reading people and playing the part that gets results. His only authentic interactions with anyone are those with Barton Keyes (Edward G. Robinson)the insurance company's investigator. The two have a deep mutual respect and even affection for each other, perhaps based on each other's marked difference from the "average" surrounding them.

The Neff and Keyes relationship is the real heart of the movie. The warmth between them a great contrast to the cold scheming between Neff and Phyliss. Their moment at the end is simply beautiful in it's futility. Keyes finds Neff bleeding with the cops on the way and they have this exchange:
Walter Neff: Know why you couldn't figure this one, Keyes? I'll tell ya. 'Cause the guy you were looking for was too close. Right across the desk from ya.
Barton Keyes: Closer than that, Walter.
Walter Neff: I love you, too.
It would be tough to get this across in a modern movie, the idea of this deep and real non-sexual affection between two men, with buzzwords like "bromance" floating around to diminish the idea. It doesn't need a name it just exists, and while it won't do either character any good, it does provide the only moment of real connection.
Posted by INDBrent at 5:23 PM

A wonderfully wicked movie. Barbara Stanwyk's real name was Ruby, you know? She isn't so much sexy as she's fascinating. And don't you think her face tells more of the story than the dialogue.

And McMurry plays a delicious rotter. You'd never know it from "My Three Sons". Do you like Fight Club? I posted on Marla Singer's character in my blog but I find that whole movie fascinating.

I'd love to discuss is some time if you're interested.

Agreed on all counts. I think Double Indemnity is one of the best movies out there. Barbara Stanwyk is terrific. She is just so malicious. For her character it's all about her look and her face. Neff never had a chance.

That's why McMurray was perfect. You have such a wholesome recollection of the my Three Sons guy and here he is plotting a murder. And he played the part perfectly. It's perfect.

Of course I like Fight Club, shame I can't talk about it. (kidding) It's brilliant, really one of the most important works in recent memory. I'll check your blog for the piece on Marla. I'm sure I'll do Fight Club here before long as it totally fits my theme (I had it in mind anyway)

Regarding discussing it, sure, let me know, I'm always up for that!

If you're looking for other MacMurry's where he plays a real ass, try The Apartment with MacMurry, Shirley McLaine and Jack Lemmon...forgive my spelling.

He plays a womanizer (MacMurry).

And Cary Grant played a sociopath in Notorious (I think that's the title). I love finding non-traditional movie roles for actors.

Even Elvis did a few. In Juvenile Deliquent, he doesn't sing. He's thief, a thug, and awful to women. He does another version of this character in Jail House Rock and the Circus movie he did.

I love the Apartment, though haven't seen it in ages. Classic. (and also directed by Billy Wilder)Billy Wilder had a lot of good films (Sunset Boulevard, Ace in the Hole) Ace in the Hole, by the way, is one of the most cynical movies ever made about the media and Burt Lancaster is great in it.

I know Notorious (although I don't think he was a sociopath in that one. Maybe "Suspicion?") Good movie though. Cary Grant was great in Hitchcock films. I think my favorite Cary Grant/Hitchcock was "North by Northwest"

I'll check out "Juvenile Delinquent" though as I've seen many Elvis movies but don't recall that role. I haven't seen an Elvis movie in a long time, that should be fun!

The Elvis movie is one of his earliest films, only in black and white. I think it's the only one he doesn't sing in.

You may be right about the title of the Grant film. It's the one where he marries the rich woman and she's not sure if he's out to kill her. Right up to the end, the audience still isn't sure. He's a manipulating sociopath in that one. Was it Suspicion? Now I'll have to google. Darn it! LOL.

I have more of a weakness for Westerns and early non-slap stick comedies but I've watched a few good ones in my day.

Henry Fonda in Tweleve Angry Men is a classic. Every remake has stunk. It doesn't work in color.

Sure Twelve Angry Men is great. There are some films that don't need a remake and that's one. It hasn't worked in color or without Henry Fonda. He was also great in Once Upon a Time in the West, and The Grapes of Wrath which ar eboth right up there in my favorite lists. I like a lot of Westerns too. I love High Noon, and most of Clint Eastwood's stuff. THere are so many others though.

Awesome post. Do you mind if I ask what your source is for this information?

Thanks! What information are you referring to? It's just my opinion of the movie.

I was just browsing all over the place and got to visit your blog. I must say that I am in the hand of luck today otherwise getting such a wonderful writing to read wouldn’t have been possible for me, at least. Really appreciate your writing.