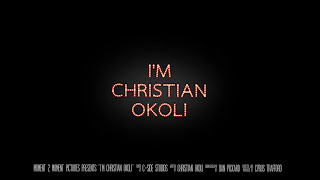 Last year, I took a look at "Joshua," a short film directed by Tim Porter, and starring Cyrus Trafford. Recently, Cyrus got in touch with me to let me know he'd directed something of his own, a 7 minute film called "I'm Christian Okoli"

The film was written by and stars the actor, Christian Okoli, playing the character of himself. The concept is straightforward and reminiscent of a stage production. "Christian Okoli" sits in a dark room telling a story about an event in an internet cafe. Another customer who is frustrated with his computer challenges Okoli to take 30 seconds to physically express his anguish at anything in the world. Okoli agrees and does his part, making a show of throwing papers around and finding the exercise amusing the more he gets into it.

When the stranger takes his turn, he lets twenty seconds go by before doing anything, explaining to Okoli that he only needs ten seconds to express his anguish.  The source of the stranger's frustration is Okoli himself and what he "represents." (Okoli is gay.) Rather than throw papers around like Okoli, the stranger chooses violence. Watching Okoli reenact the scene, both throwing and receiving punches from memory is an interesting experience. Okoli remembers where he got hit, but we know that the same force isn't there in the blows, although we can imagine it very easily.

The short nature of the story gives us a surprising look at how little time it takes to hate someone and to turn a seemingly friendly interaction into a traumatic experience. When Okoli begins telling the story of this encounter, I assumed it would be a friendly exercise in frustration management, and perhaps a meaningful moment of interaction between strangers. While it certainly is meaningful, the meaning drastically changes. We have to consider the implications of a man so frustrated by the existence of another's possible sexuality that he needs to resort to violence, creating an elaborate frame to use it when none exists, like a childhood game with added cruelty.

This short is focused on essentials, relying on Okoli's expressiveness, the room and the story. While the room is dark, Okoli is lit clearly and brightly, We see him look to a light poked in the wall, as if telling his story is a chance to puncture the darkness around him a little bit. While it always surprises me that these stories still need to be told, violent hate crime still happens all the time, so there's no question that they do. Hopefully one day we'll reach a point where no one is threatened by another person's lifestyle, but we still have a long way to go. It certainly helps that people like Okoli and Trafford insist on telling their story and I'm hoping they find some new listeners. "I'm Christian Okoli" proves that you don't need a huge budget to tell an important story well.

"I'm Christian Okoli" is currently circulating at film festivals, and special screenings. For more from Cyrus Trafford and Moment2Moment Pictures visit his website http://www.m2mpictures.com/ You can also get in touch with him on twitter http://twitter.com/cyrusTrafford
Posted by INDBrent at 1:58 PM

Thanks for your article.