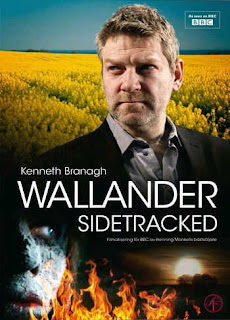 The BBC Wallander Series has been suggested to me quite a few times, and I finally managed to check out a few episodes. I'm certainly glad I did as it's been one of best surprises in a long time. "Sidetracked" is a great introduction to the character of Kurt Wallander (Kenneth Branagh)

From the beginning it's clear that we're in for quite a visual experience. We see a young girl in distress, hiding in a field of impossibly bright yellow rapeseed. Wallander is called in by the owner of the field. He looks like he's been in bed for three days, although he's calm enough. The farmer remarks that he thought they'd send a police car "with lights and everything." Wallander tells him "There was an accident. The cars with lights are all taken." He starts through the yellow field, waving his badge to reassure the girl, telling her he's police. It seems to have the opposite effect however. The girl douses herself with gasoline and lights herself on fire.

Wallander can't get his head around this, he recalls that the girl was terrified of him, although they didn't know each other at all. At the station, he asks "What kind of world are we leaving, a 15 year old girl, that she would burn herself to death?" When a fellow officer, Magnus Martinsson (Tom Hiddleston) points out that the girl committed suicide, and it isn't really a "crime" Wallander responds, "A 15 year old girl burned herself to death. What would you call it?" Wallander can't keep the image of the girl in the field from replaying in his head.

While he tries to figure this out, the Swedish former Minister of Justice is found on a beach, killed with a small axe to the head and then scalped. Digging into the man's past, he learns from an ex reporter that there were a lot of skeletons in his closet. The Minister had young women delivered every week and due to his influential position had many reporters keeping everything covered up. When others are killed in the same fashion, including a thug with a violent history, Wallander looks for a connection. He questions an ex police officer, who refers to himself as a "janitor" and devoted himself to keeping the Minister's dirty laundry from coming out. He questions the thug's family, and the man's wife and older son seem to be relieved that he's dead. The thug also has an older daughter, who is out of town, and the mother assures him, isn't involved with any of it. A profiler is brought in to assist, and he suggests that the scalping indicates someone taking on another identity, and is possibly a sacrifice to save the soul of someone else.

While investigating these cases, he negotiates his own personal life, spending time with his daughter, Linda (Jeanny Spark.) We learn that Wallander and his wife are separated and he has no contact with her. Linda urges Wallander to visit his father, Povel (David Warner) as his birthday is approaching. She warns him that there's something wrong. He manages to take the time to visit his father, a painter, who has no appreciation for his son's work. The case he's on now however, caught his eye, as he knew one of the victims from art circles, and he doesn't seem to mind that the man is dead. Their family dinner is marked by an unexpected angry outburst from his father.

Wallander puts the clues together and finds the killer although the resolution is a tragic one. He also gets a call that his father was in a fight and has been arrested. His father reveals that he's succumbing to dementia and has perhaps months left. After getting his Dad released he visits him at home and breaks down telling his father that he doesn't know if he can do it (his work) anymore. Povel reveals that his whole career has been painting the same landscape thousands of times. He recalls when Wallander was a child and he would ask why his paintings were all the same. He tells his son that every day he woke up planning to paint something different, but the same thing would come out every time. He adds "What you've got is your painting. I may not like it. You may not like it. But, it's yours." Povel asks Wallander to take him to Rome, and he gladly agrees.

Wallander is truly exceptional television. The highlight is Branagh's exceptional portayal of Wallander, the "poet police man." We see that every thing that happens in a case is taken personally by Wallander, who moves as if sleepwalking through a deep depression. He lives his life like a long sigh of grief. He's a great cop, but it takes great energy for him to relate to others on a personal level, as his job consumes him far more than even his fellow officers. He can't help but bring his work home, and he can't help but question what these atrocities say about the world he lives in. Called upon to solve cases where those who have the information are less helpful than anyone, he's left to figure it out on his own. While not a trigger happy cop, he does what he must without hesitation, and his own actions sometimes hurt him as much as those he responds to. His effectiveness and wit are not hampered by his unhappiness. "What kind of world are we leaving?" he asks and this seems to be the main question that plagues him, everything else that happens only sharpens the question.Wallander can sigh all he needs to but he still knows that a cop has to act and may have to shoot. Branagh's exceptional portrayal puts him in the top tier of memorable film detectives.

Directed by Philip Martin, the Swedish landscapes and architecture give Wallander's existence a surreal feeling. His surroundings are impossibly bright, clean and neat, yet violence and ugliness pops up everywhere. Although the first in a series, "Sidetracked" works very well as a standalone film. Based on a novel by Henning Mankell, we get the sweep of a full story with the added benefit of knowing there are more to come. The supporting roles are as solid as can be, Tom Hiddleston and David Warner particularly. Seeing Branagh and Warner together, we believe they could be father and soon even when they don't say a word. Their mannerisms mirror each other and show their deep relation. The attention to visual details is truly impressive and easily tells us as about these characters as the dialogue.

All in all, Wallander is some of the best television that I can recall. The quality of the production on all levels exceeds that of most feature films, in story, visuals and acting. It has all set up elements of the best Greek tragedy, Wallander is not damned by his vices but his virtue. He's a character who can't help but be outraged and ask "How could this happen?" even though he's seen the horrific so many times. Rather than become jaded, he's perpetually hurt, taking it all as a personal affront, every time it happens. That he could operate effectively as a police officer like this is remarkable. It does catch up with him, but the debit comes out of his personal life, which is largely nonexistent. Watching him exist, we sense that this all much catch up with him some day, and it's almost like watching a man aging in front of you. While it certainly won't make any kids wish to be Wallander, it's refreshing to see a detective who cares enough to be perpetually ruined for the sake of the world that should exist.

I've seen this series on my local PBS station and I love it. The plots are well constructed, clever and not predictable. Kenneth Branagh is an exceptional actor. I had the opportunity to meet him when he brought his Renaissance Theater Company to Chicago back in 89 for the International Theater Festival. They performed King Lear and A Midsummer Night's Dream. He was wonderful in person, treating the theater crew very professionally and was extremely nice to us. He bought lunch for all on several occasions. Not that this really has anything to do with your post. Sorry! I tend to ramble on sometimes. :)

Thanks Mel! It's just exceptional particularly for television. How cool you got to meet Branagh! It's awesome when people are as nice in person as you'd expect them to be.