The Rise and Fall of a White Collar Hooligan 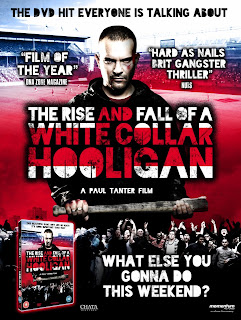 Paul Tanter, most recently involved with the "Jack" trilogy of films (Jack Says, Jack Said, Jack Falls) is back with another British crime drama, although this time, it's more firmly based in real world events.

The Rise and Fall of a White Collar Hooligan, just out of UK theaters, is now available on DVD and on demand. I greatly appreciate Tanter's devotion to crime films and based on his previous writing and directing efforts, I would suggest that fans of the genre have a look, as original crime films, particularly independent ones need our support.

The film centers on Mike Jacobs (Nick Nevern,) an unemployed "hooligan," (participates in sports based brawls) who bumps into an old  friend, Eddie Hill, (Simon Phillips,) who proposes a business opportunity. Eddie's opportunity isn't drugs, or your typical crime story fare, but a credit card scam, meaning, depending on your viewpoint, that the banks take the hit. He fails to mention his connections to certain gangsters, however, although Mike is certain to discover that. I'm sure it's easy to paint it as a "victimless" crime, particularly when the money comes in, all without the risk of the more "blue collar" criminal activities. Of course, anything too good to be true, probably is, and it's only a matter of time before the gangsters appear to take their cut. Can Mike get himself out, or are the perks that come with lots of easy money too enticing to ignore? If crime movies of the past are any indicator, extricating himself won't be as easy as deciding to stop.

Based on true events, the subject matter is certainly topical. "White collar" crimes seem all too common in recent years, with many egregious activities happening and often going unpunished.  Mike isn't a banker or mortgage officer though, more an entry level white collar criminal. It reminds me of the stories of very famous gangsters such as John Dillinger who saw his share of glorification for stealing from the banks, and supposedly tearing up mortgages. He also conflicted with gangsters looking to get their cut.

I don't know that Mike Jacobs is a Dillinger, but maybe a step in that direction, even if only as his own justification. In our current economic climate, with "the 1%" now a buzzword, are there more "Robin Hoods" in the making? It's an interesting dilemma. I'm sure some would say he's long overdue, yet I doubt anyone would lend him a credit card. Take a look at The Rise and Fall of a White Collar Hooligan and see what you think. I'll update here once I get the chance to see it!

I enjoyed it. Check out my review if you get the chance. Cheers.

Glad to hear it, Ricky! I will certainly have a look at your review!