Wire In The Blood 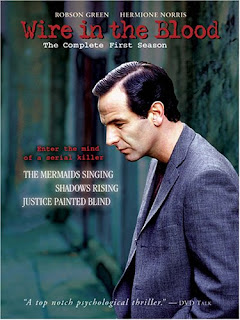 Wire In the Blood is a show I recommend to just about everybody who mentions TV crime shows to me. There are certainly a lot of them to choose from at any given moment, with any desired focus, from forensics, to detective work. Wire In the Blood is centered around a clinical psychologist, Dr. Tony Hill (Robson Green) as he assists The Bradfield Police in locating and arresting serial killers. Based on the novels and characters of Val McDermid, there's nothing else quite like it. At the moment all six seasons are available on Netflix Instant, so certainly check it out.

The typical episode set up is that based on crime scenes, which typically consist of discovered bodies left in gruesome display, Tony develops a profile of the killer by drawing conclusions from where the bodies are left, how they've been treated, and who the victims themselves are. Was it sexual? Were they dropped to the ground or placed precisely? Were they beaten? What are they wearing? Was it public or hidden? All of these factors and more bring him closer to the killer and a step closer to solving an unsolvable case. Tony is not Sherlock Holmes drawing brilliant deductions from seemingly unnoticeable details, simply a brilliant man who pays close attention and has special insight into the significance of certain actions, knowing for example that painting the fingernails of a victim, says a lot about the killer's intentions. He's not infallible either, and in a realistic touch, we see that his profiles change as more information becomes available. He's not a profiler, he would insist, but a psychologist which is a far more complex thing.

Tony's brilliance is established time and again, yet most on the Police force remain skeptical  of his talents, not believing that he can glean so much from seemingly insignificant details, and perhaps feeling that his involvement trivializes the department itself. Initially, Tony is sought out by Detective Inspector Carol Jordan (Hermione Norris) as a last resort. The two develop a close rapport after successfully solving several cases together.  We see that Tony is not your average psychologist and as he digs for information to profile killers we see him mentally putting himself in the shoes of both the victims and killers. It's clear that Dr. Hill understands these disturbed individuals far more than he would like to. Tony has his own eccentricities and like the killers he profiles, is damaged from his own abusive childhood and putting himself in the shoes of killer and victim certainly takes its toll on him. He suffers from dyspraxia (problems with motor skills and motion planning) and has poor social skills. He has to be reminded to do such simple things as get into a car before it can leave and misses the significance of "going out to dinner." Dr. Hill spends most of his off time playing video games, as forming relationships is far more difficult for him than profiling killers.

The cases he works on add to his difficulties, a reminder of much he has in common with his subjects. From the beginning, we see that Tony acts as psychologist to the killers he helps apprehend after they're locked up, and seems to display a very real desire to help them, although he has no illusions of false rehabilitation. On the other hand he has a very strict moral code and values the lives of others highly, often being outraged at those who would callously take it (including the life of a killer.) To Tony, catching these killers is an important contribution to the world. There is always a reason that these killers act, and their focus lies very often in childhood. Tony wants to understand it all, perhaps in an effort to understand himself. Dr. Hill is not out to kick ass, but to solve a problem. This would seem to paint a picture of a naive character, but quite to the contrary, he's not surprised when the worst comes to pass as it most often does. He looks at the worst of humanity every day; child killers, sexual predator, cannibals, among many others.

The interplay between Tony and D.I. Carol Jordan is fascinating to watch. They move from a professional relationship to friendship fairly quickly, and there's a sense of wanting to take things further, but relationships prove difficult, as missed cues and standard social conventions are not easy for him to negotiate. Carol is an extremely competent detective and in command of her job. This isn't a damsel in distress set up as it's every bit as likely that Tony will be the one in jeopardy and Carol will be doing the saving. Hermione Norris is very convincing in the role.

She's replaced in Season 4 by Detective Inspector Alex Fielding (Simone Lahbib) who is also a very competent detective, although her life is a bit more chaotic. She also becomes friends with Tony and while they seem more comfortable with friendship than Tony and Carol, romantic leanings come up there as well. Tony also enjoys spending time with Alex's young son, Ben, relating to him almost as a peer in a way. Like Carol, she's a very competent counterpoint to Dr. Hill.

They're assisted by others in the Department, including DS Kevin Geoffries (Mark Letheren) a good cop who has a habit of making shortsighted mistakes and DS Paula McIntyre (Emma Handy) a reliable policewoman. They change Department heads several times in the show, although most often, the current ACC (Assistant Chief Constable) has little appreciation for Tony's assistance. Of course the killers are are a pivotal part of the show and the different actors work hard to add the damage and suspense required to make Tony work. In particular, Maggie Thomas (Elaine Claxton) the first killer in the series, a child murderer Tony has caught before the show begins and conducts therapy sessions with while working other cases. Her character gives us a great portrait of extreme mental illness. It also reveals much about Dr. Hill, showing the lengths he'll go to discover where Maggie has buried her victims. Dr. Michael Bryant (Jolyon Baker) is stunning as the last killer of the series, and as close as we come to an arch enemy. As much as law enforcement is skeptical of Dr. Hill's help, they are over eager to accept that a true monster has been quickly rehabilitated, giving Tony the chance for an "I told you so." that he would much rather have avoided.

All in all, this is a series about figuring out the intricacies of a killer's psychology and then acting on the information to save lives. Unlike many of these shows, perhaps in part because it's a BBC series, and certainly due to smart writing, every case does not lead to a shoot out. It's refreshing to see these scenarios solved with the brain rather than a gun every time. Tony Hill is a very unlikely resource, yet always a supremely effective one. While many with Tony's problems would have difficulty functioning, he manages to keep going forward, making a real difference besides.

Wire in the Blood manages to be entertaining on many levels. Whether watching Tony try to negotiate a social gathering to save his job, or trying to determine if they're looking for one or two killers, it doesn't lose your attention for a moment. It doesn't coast on the writing either, the show has very competent directors, who keep a very strong visual sense, dark and well suited to the material, with occasional illustrations of worlds that could only exist in the mind. And of course, the acting is all top much, Robson Greene's Tony Hill is one of the best examples anywhere of an actor completely becoming the character he plays. The show is full of well drawn characters. My only complaint is that they're not making any more episodes.

I've been looking for a new TV show to throw myself into. This sounds like one I'd dig. Thanks for the write up!

Cool Bob and thanks for stopping in! I would never have found it if not for Instant Netflix, but after one show I was hooked. Let me know how you like it!

Robson Green and Hermione Norris are two of my favourite British actors but their chemistry was incredible in this show. Wire in the Blood is one of my favourite shows of all time and I was so sad when it was cancelled.

They were quite a duo! It's one of very few shows that made me really sad when it ended. it was just so well done!

I am sorry but 'Wire in the Blood' is not a BBC series, it was an ITV production.
Other than that I agree with your analysis of the program.