Jack Nicholson is one of the most well known actors in the world, having been in the business since the 1950's. The remarkable thing about Nicholson is the number of brilliant roles he's had in that time. He can tell the audience more with a facial expression than many actors can in a whole career. By now his smirk and raised eyebrows are something of a trademark. He rarely plays a straightforward role, seemingly preferring acerbic yet suave characters who are challenged, yet larger than life. Even now, he can be relied on to take over the screen any time he's on it. Of course there are many other roles that could as easily belong on the list. Feel free to add your favorites in the comments here or on the Facebook page.

Freddie's daughter was killed by a drunk driver in a hit and run accident. The driver, John Booth (David Morse) was sentenced to serve six years in prison. During those years, Freddy's marriage has dissolved and he's spent most of his time drinking, sleeping with prostitutes, feeling guilty, and planning revenge. He imagines that killing Booth will somehow help things with his wife Mary (Anjelica Huston) and fix something in his own life. When Booth is released, Freddie finds that none of this will happen as easily as he'd imagined, not even when Booth offers no resistance at all.
"Tell the truth Mary! You want me to kill John Booth!"

On the day he retires, Police Chief Jerry Black, investigate the rape and murder of a child. When asked by the victim's parents, he makes a promise to catch the killer. Despite the arrest and then suicide of a suspect, Black is certain the killer is still out there. Once retired, he pleads with the department to keep the case open, although he is largely ignored. He buys a gas station in the area of the attacks, and starts a relationship with a woman who has a young daughter in the age range of likely victims. Finding clues about the killer, he investigates deeper until the case becomes an obsession, and leads him to some dangerous activities, which place those around him, and his own credibility in danger.
"I made a promise, Eric. You're old enough to remember when that meant something."

Presumably, everyone's aware of Jimmy Hoffa the famous union organizer. Here we get a look of the man at work and Nicholson portrays him like an unstoppable machine (for a while.) Hoffa is willing to do anything and ally himself with anyone if it will increase the power of his union, giving truck drivers more weight to use against the owners. More than a suit, he wasn't afraid to get his hands dirty, which earned him the support of many working men. He also made a lot of powerful enemies. And, he is certainly no saint, even to his own allies, if it served the interests of the union. Perhaps he made himself too formidable of an opponent, as in the end there was only one way to handle a guy who wouldn't back down.
"Never let a stranger in your cab, in your house or in your heart... unless he is a friend of labor." 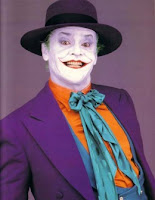 Long before the current series of Batman movies, and before comic book films were expected to be successful, Tim Burton's vision with Michael Keaton as Batman and Nicholson as his nemesis, the Joker seemed to promise that comic book characters could make for an interesting movie. It's Nicholson's movie as much as it is Keaton's, and his portrayal gives us a character who is capable of any atrocity, yet never loses his twisted sense of humor. As dedicated to entertaining as he was to malevolence, he showed that any hero is largely defined by his adversary. While none of the sequels lived up to the first one, it was a strong film on it's own and Nicholson was a large part of it.
"Tell me something, my friend. You ever dance with the devil in the pale moonlight? "

Francis Phelan is an older alchoholic vagrant who used to be a baseball player, but one day left his life behind. During the great depression, Phelan wanders around, taking odd jobs for a place to sleep while dealing with his alcoholism, guilt over the dead, including a lost son, and his mental problems. Revisiting his hometown, Albany, he spends some time with his girlfriend, former singer and fellow alcoholic Helen Archer (Meryl Streep.) He briefly connects with his wife, Annie, from the past, although he's past the point of returning to what he once had.
"Goddamn dead men, traveling around together."

Robert Dupea lives a simple, blue collar life, working an oil field and drinking beer with his friend Elton, (Billy Bush) and spending time with his girlfriend Rayette (Karen Black.) Elton is soon arrested for a robbery and Rayette tells Robert she's pregnant, prompting him to leave his job and visit his sister. She urges Robert to go see his father whose health is failing. He heads to his father's place, leaving simple Rayette at a hotel as she would clash with his family's atmosphere of privilege. Robert has a fling with his brother's wife to be, and is surprised when Rayette gets bored at the hotel and finds him, causing Robert to confront his family and their way of life before leaving, although he still has as many difficulties with Rayette and his attempts at blue collar life and may just not fit in anywhere.
"I move around a lot, not because I'm looking for anything really, but 'cause I'm getting away from things that get bad if I stay. "

Sailors Buddusky and Mulhall (Otis Young) are assigned to escort young fellow sailor Larry Meadows (Randy Quaid) to Portsmouth Naval Prison, where he's to serve eight years for a minor offense. Knowing that the oddly likeable but inexperienced Meadows is about to lose the best years of his his youth to the grim prospect of incarceration, Buddusky and Mulhall decide to give him a good time on the way to Portsmouth. They get him drunk and help him lose his virginity among many other new experiences. Meadows has the "best time of his life." but as much fun as Buddusky and company are having, the Navy is his life and he still has a job to do.
"Why does all of this make me feel so fucking bad?"

Jack Torrance gets a job, being caretaker for the Overlook Hotel. Part of that position is the likelihood of being snowed in for great lengths of time, which is blamed for causing a former caretaker to murder his family. Jack sees it as a chance to devote time to his writing and to put his messy life back together. Jack's son, Danny starts to have disturbing visions, and we learn that he has "The Shining" and extrasensory gift. Jack falls under the influence of supernatural presences in the hotel and soon goes insane, attempting to repeat the behavior of the previous homicidal caretaker, while his family tries to survive. Kubrick's film has been criticized for departing from the novel it was based on, but Nicholson's acting helped make it a classic nonetheless.
"I dreamed that I, that I killed you and Danny. But I didn't just kill ya. I cut you up in little pieces. Oh my God. I must be losing my mind." 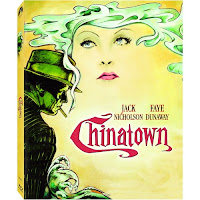 Private Investigator J.J. Gittes takes a pretty normal adultery case, but after taking pictures of the suspected cheating husband, Hollis Mulwray, he learns that his client, Evelyn Mulwray, was not Mrs. Mulwray at all. Hollis Mulwray is found dead soon afterwards, prompting Jake to do some more digging. He investigates reservoirs which were Hollis' main focus, and gets his nose slashed for his trouble. He gets closer to the real Evelyn Mulwray, and crosses paths with her father, the powerful and influential Noah Cross (John Huston.) Soon he realizes that the situation is more twisted than he could've imagined, and a lot bigger than he can handle.
"Sometimes you're better off not knowing."

Nicholson's McMurphy is a force of nature. Getting himself sent to a mental hospital in order to avoid jail time, he runs into more trouble than he anticipated, clashing with the ruthless Nurse Ratched (Louise Fletcher.) He's celebrated by his fellow inmates, who eagerly take his lead in opposing the stifling administration. Ratched takes his disdain for the rules personally and their conflict escalates until the state of his mental health becomes unimportant, and punishing him becomes the main objective. Her coldness towards the fate of his fellow inmates sets McMurphy over the edge and when he reacts, we see that the system has many ways of controlling people, breaking those that won't bend to its will.
"But I tried, didn't I? Goddamnit, at least I did that."
Posted by INDBrent at 7:38 PM

You listed the best of them! but one in particular is missing and I would have liked to have seen it on here; The Witches Of Eastwick. His character Daryl deserves a place on this list! :)

Nice to see THE PLEDGE on your list. I love that film and Nicholson delivers a gritty, complex performance.

I would also add to your list the underrated neo-noir BLOOD & WINE. Nicholson tends to get overshadowed by astonishing sleazy performance by Michael Caine but he's still really good as a wine dealer who goes in on a scam with his grifter buddy with horrible consequences.

Great list! Your top three are definitely my favorite, so I'm right there with you. Jack Nicholson does a hell of a good anti-hero. Hell, he's just a creepy man in general. But Chinatown has to be one of my favorite of his roles, hands down.

@Lisa-Marie I agree that was a great role. Nicholson was practically born to play the devil and he does a great job in that one. It almost made it to this list, I even put up a clip from it on the FB page when I was deciding.

@J.D., yeah I'm a big fan of the Pledge. I remember being quite amazed at the performance when I first saw it. Blood and Wine is a good one for sure, and I could certainly see it in my top ten.

@M., Yeah the first three are the big masterpieces imo. Beyond that he has so many great roles, it's tough to pick just ten. I'm right there with you on Chinatown too. It's such a wonderful, nasty, twisted, gem of a film. "Forget it Jake..." is one of my favorite movie moments.

Not a big fan of Chinatown. I never saw it as Nicholson's best. I know, stone me now. LOL For me his best roles are RP McMurphy, the Joker and Hoffa. I also enjoyed him as Charley in Prizzi's Honor. Don't know if that qualifies as anti-hero, but hey he was a hit man. :)

Hi Mel! I'm just going to have to disagree with you there. I think Chinatown is a fantastic film and one of his greatest roles for sure. He was great in Prizzi's Honor, and certainly an anti-hero. I could see it fitting into the top ten, but I don't know which I would trade it for. He's had so many great parts.